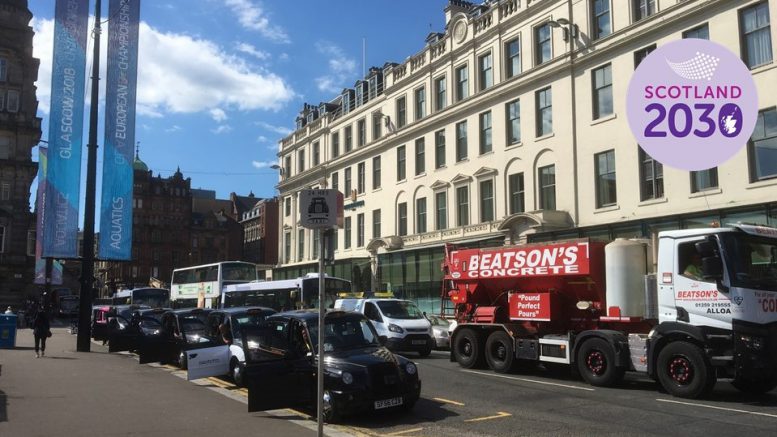 On 4 July 2018, the Futures Forum held a seminar on the opportunities for Glasgow from the development of autonomous vehicles. Hosted by Glasgow City Council and produced in conjunction with Jacobs and Glasgow Chambers of Commerce, the event was chaired by Councillor Jen Layden and featured a keynote introduction from Ivan McKee MSP, Minister for Trade, Investment and Innovation.

Following a presentation from Stuart Gibb on different scenarios for the adoption of autonomous vehicles, there was a discussion led by an expert panel featuring:

Stuart Gibb introduced his presentation by suggesting that we are planning for an uncertain future. While much has been made of the enormous promise of CAV, the reality is that – beyond first order impacts – it is almost impossible to say what a world with autonomous vehicles will look like.

With changes in other sectors likely to continue to disrupt how much, how often, when and how people and goods move, uncertainty over CAV is only set to increase in the short to medium term. If we add to this the potentially polarising commercial interests in CAV and mobility as a service (MaaS), it becomes vital that cities begin planning for a range of plausible futures reflecting differing views of technology, social and economic trends.

Stuart continued by noting that, although the vast sums of money invested in the CAV market in recent years gives the impression of a ‘first past the post’ race, there are still a number of significant hardware, software, legislative and social barriers to overcome. Indeed, questions have been raised over whether Level 5 autonomy can ever be reached, and over the past year a number of manufacturers have moved to dampen expectations and push back previously promised timescales for CAV arrivals. Based on level 4 or 5 autonomy, the scenarios reflect a range of ‘probable’ and ‘desirable’ futures which take into account advances in vehicle technology and ICT as well as changing attitudes towards car ownership and public health.

All four scenarios are underpinned by the common baseline assumption that, by 2040, commercially available CAV will have been on our roads for more 10 years.

In this scenario, authorities do nothing. Price is no longer a barrier to adoption meaning that a growing number of people own a CAV. Ride hailing firms and other early adopters of CAV operate a mixture of private and shared autonomous taxis. Due to the lower fares offered, the demand for their services has increased. Congestion is still a major issue due to the rise in short-range autonomous taxi rides and – to a lesser extent – empty return journeys made by privately owned CAV ‘drop-offs’.

Scenario 2: Maturing mobility as a service

In this scenario, a small number of people own a ‘premium’ CAV however these are typically reserved for leisure trips. Many car owners no longer feel the need to own a car due to the wide range of competitively priced alternatives.

While the number of vehicles on the network goes down, the total distance travelled goes up due to the popularity of ‘unlimited ride’ & ‘family plan’ packages and the cross-selling of products with those from other sectors. Road space previously reserved for parking starts to be reallocated back to the public realm and for the provision of on-street electric charging stations.

Congestion during peak periods has reduced, however due to the ever-increasing levels of travel and the high proportion of human driven cars still on the network, has not been ‘solved’ for good.

This scenario is similar to scenario 2, albeit with greater input from local and central government to decentivise private cars and single occupancy autonomous vehicles in favour of shared mobility solutions.

The split between private vehicles and shared mobility solutions has been reversed with the latter now accounting for the majority of vehicles on the network. As a result of the interventions, the benefits of MaaS have been further unlocked including a notable reduction in congestion, lower & more flexible fares for travellers, lower operating costs and increased economic activity.

This is like scenario 3, albeit with greater input from local and central government to incentivize active travel and ensure that short distance travel is mostly made by foot. In order to preserve the mobility requirements of those who need it the most, shared autonomous taxis can still access all parts of the city, but vehicle speeds have been ‘throttled’ to limit over use.

In addition to the substantial public health and road safety benefits, the interventions have also resulted in increased inward investment and the growth of independent retailers and local micro-economies.

Overall, Stuart suggested that, amidst the optimism which surrounds autonomous vehicles, the reality is much more uncertain for cities. It is entirely conceivable that cities will see an increase in traffic volumes and congestion in the short to medium term, so, in order to mitigate the unknowns, cities must begin planning for a range of possible futures based around active travel and shared mobility solutions.

Stuart noted that, by focusing on the movement of people rather than the movement of vehicles, CAV could enable transit operators to run services at much higher frequencies and relatively marginal costs. The introduction of CAV could also see major financial savings through not having to provide inner city parking which can be both expensive to build and maintain.

Overall, in each of the scenarios considered, there are acknowledged to be ‘winners’ and ‘losers’. In order to maximise the benefits and minimise the negative side effects, cities need to ensure that they manage streets for the public good, that streets don’t get turned over to private corporations, and that those from low incomes are not left behind by ‘premium’ mobility solutions.

In a wide-ranging discussion following the presentation, the following issues were covered:

The scenarios presented by Jacobs were seen as realistic, and it was agreed that the technology had the potential to be transformative – we just have to be careful about how it transforms our communities. It was noted that there is a lot of work still to do on the technology – removing the human involvement completely from the car is hard, and other issues such as changes in weather and light can present problems.

More generally, although we do not know what autonomous vehicles will look like or when they will become fully adopted, decisions now will make a difference and local and central government have to be involved at the start. There were seen to be both positive and negative futures, so it is important to become involved early.

There was agreement that we have a lot to offer in Scotland: we have diverse geography and socioeconomic landscape, with both urban and rural roads and challenging conditions that will provide a useful testing ground that can only ultimately make vehicles better and better.

We also have great engineering in Scotland via our higher education sector, companies and government support, along with opportunities in our space and marine sectors too. There would be a benefit in finding our niche, and for all our work we need a co-ordinated approach involving government, industry and academia.

It was noted that, for AVs to work, well-maintained roads are needed, meaning extra demands on public services and infrastructure. Lots of tech development requires to be done in both urban and rural areas, and much of it will be unique to the circumstances: experience in one place does not translate to the experience elsewhere.

There were seen to be both challenges and opportunities for Glasgow. The Glasgow Connectivity Commission is a good starting point, but we have to make sure that we track the right information – it was unclear whether Glasgow had the right data to make decisions.

Equally, it was important to consider the whole city and not just the city centre. There has been a policy of decentralisation and there may be an opportunity to repopulate the city centre, providing a different balance for the city. Indeed, although access to cars is important for many, everybody is ultimately a pedestrian so can we take the opportunity to redesign the city and make pedestrians the most important?

In economic development, Glasgow was seen to be doing well and there was a desire to make the link in Glasgow’s economic development strategy to the opportunities in autonomous vehicles, including by supporting high growth tech companies. Other companies in the city, such as eSure, Allied Vehicles and Arnold Clark, along with the shipping industry and university sector, should also be involved.

It was suggested that Glasgow requires a flagship system. Although it may be difficult to find a controlled enough environment to test the technology, it was suggested that, in much the same way as global cities require a bike hire scheme to be seen as a forward-thinking city, Glasgow will need an AV project to compete with similar cities. On a positive note, it was pointed out that Glasgow is good at going after a pot of money, and so there may be opportunities available to the city.

Overall, it was noted that Glasgow will have a role in facilitating the roll-out of the technology in the city, including by licensing any arrangements. There may be job lossess and disruptive effects in city that has had to adjust to deindustrialisation in its recent past. Glasgow – like other parts of Scotland – needs to gather as much information as possible, consider the potential futures and help equip its citizens with the skills to embrace the opportunities available from autonomous vehicles.

Many challenges related to the technology were brought up, linked to finance, the technology, people’s mindset, the regulatory framework and public safety.

As well as the practical challenges in developing the technology so that it can be rolled out in a busy city like Glasgow, it was suggested that AVs could cause greater congestion and were less beneficial than investment in active travel. The point made by Stuart Gibb in his presentation about inclusion was reinforced – this technology has to be enabled to work for everyone, not just the privileged few.

Passenger safety was also brought up, as there will be no driver present. There were also questions about data security, given that the technology will automatically track people’s location, and the cyber security, given that AVs would become a target for malicious intervention.

The question was asked: are autonomous vehicles therefore worth it?

In response, it was suggested that AVs will happen so we have to prepare and look to exploit the economic opportunities that exist. Furthermore, there will be benefits that are not monetary. An improvement in safety will see fewer people dying or being injured on the roads, while low or ultra low emission vehicles bring environmental benefits.

There are potential benefits in inclusion and mobility, particularly for older people, those with impaired mobility and those who currently find it hard to access jobs or education because of limited transport options. Additionally, there were seen to be clear benefits in efficiency through the reduction in road congestion, especially with AVs enabling a higher throughput of vehicles that are not subject to poor driving habits, such as breaking unnecessarily on motorways.

Their development should also help cities refocus their landscapes and turn them over to active travel, given the potential to free up space currently used by cars – particularly the large amount of parking space that may not be needed.

Finally, it was pointed out that either you’re the one doing the automation or you’re the one being automated. Glasgow, and Scotland, should take control of the opportunities presented by autonomous vehicles.