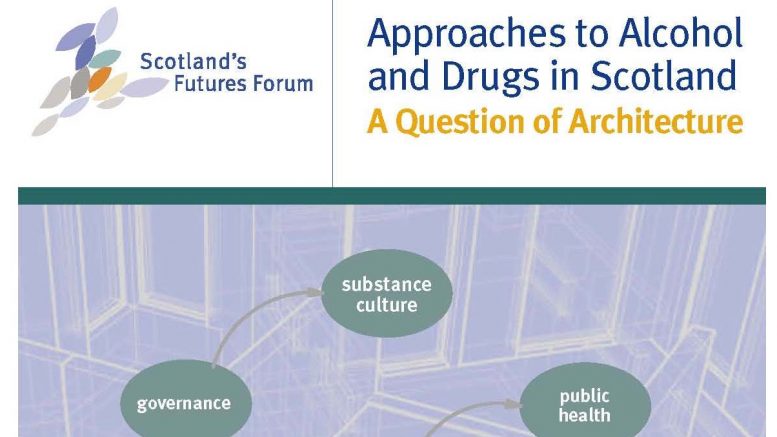 In 2008, Scotland’s Futures Forum published its report on how Scotland can reduce the damage caused by alcohol and drug misuse by half by 2025.

The project used a systems mapping approach and explored the issues from a public health point of view.

Click the image or link below to read the full report:

Read our report: Approaches to Alcohol and Drugs in Scotland

An Executive Summary is also available:

Approaches to Alcohol and Drugs in Scotland: Executive Summary

On 15 January 2007, the Futures Forum hosted a conference in the Chamber of the Scottish Parliament, chaired by the Deputy Presiding Officer, Trish Godman MSP to consider the forthcoming Royal Society of Arts report, Drugs – Facing Facts, and its likely implications for Scotland.

As a result of that day, the Futures Forum was tasked with undertaking a futures project with a wider remit to include alcohol, to explore the question “How can Scotland reduce the damage to its population through alcohol and drugs by half by 2025?”

During the next 12 months, the Forum effectively took shape as a self selecting project community of over 1,000 people, to help bring fresh perspectives in answering this question

As part of the project, 12 dimensions were identified to the project question, ‘how Scotland could reduce the damage to its population through alcohol and drugs by half by 2025’.

The Futures Forum then set about looking for experts both nationally and internationally, who could speak, discuss and debate with participants their work, evidence and approaches.

This referenced collection of lightly edited presentations forms part of the evidence base for Scotland’s Futures Forum project findings:

Approaches to Alcohol and Drugs in Scotland: 12 Dimensions of a Manageable Problem