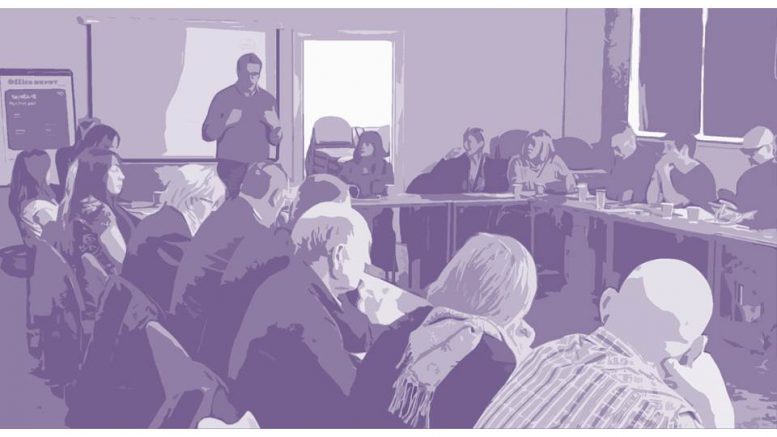 Ten years on from its ground-breaking report into reducing harm caused by alcohol and drugs, Scotland’s Futures Forum returned to the subject with an event to consider drug use in Scotland.

Following a request from a cross-party group of MSPs and former Presiding Officers, the Futures Forum hosted an event to consider the landscape for drug use in Scotland on Friday 4 May in Glasgow.

The seminar, chaired by Futures Forum directors Clare Haughey MSP and Adam Tomkins MSP, assessed the current situation and potential approaches to tackling the problems it provokes, asking participants where we want to be five years from now. It heard from Elinor Dickie, public health expert at NHS Health Scotland, Dave Liddell chief executive of the Scottish Drugs Forum, and Rosie Hutcheon from Step Together Family Support.

In the 10 minutes available to her, Elinor chose to highlight some key messages from what we know about those in need and what we know of what works. She focused on problematic drug use, older people with drug problems and medication-assisted treatment, before giving her thoughts on what should come next.

Elinor opened by stating that we are facing a public health crisis from problematic use of drugs and rising drug related deaths. The good news is that drug use in the general population is falling and remains low amongst young people: in 2016, 95% of 13 year olds and 81% of 15 year olds had never used drugs. However, although the level of problem drug use has not changed significantly in recent years, the age profile has changed.

The increase is largely accounted for by increased deaths among over 35s: at the same time, there has been a fall in the number of deaths of people aged under 25. Most drug related deaths were of people who took more than one drug, but opiates and opioids were implicated or contributed to nearly 90% of deaths. Some 68% (592) were men, although the percentage increase over time has been greater for women (169% compared with 60%) from 2002 to 2006 and 2012 to 2016.

In 2014, we know over half of those who died a drug-related death (53%) lived in the most deprived quintile, a clear inequalities issue. As a public health issue, the Scottish Burden of Disease Study sets these deaths in context. It shows that drug use disorder is the sixth leading cause of early death in Scotland. Out of 132 illnesses assessed by the study, it is behind only heart disease, lung cancer, chronic obstructive pulmonary disease (COPD), stroke, and dementias. Dave opened by reflecting on all that been developed in Scotland over recent years. The range of services included outreach, needle exchanges/injecting equipment provision, opioid replacement therapy, social care support mostly through the voluntary sector, naloxone, criminal justice interventions such as drug treatment and testing orders, recovery groups/cafes, employability services, family support, housing including housing first, and welfare rights support. The approach to injecting equipment provision remained relatively unchanged, although there had been some reductions through cuts and other issues, such as at Glasgow Central Station. The provision is mostly through pharmacies, with some examples of very stigmatising practice in those settings. There was, however, significant evidence of harm reduction in, for example, HIV and bacterial infection rates. On injecting equipment provision, Dave suggested that certain developments are required: increase the number of outlets that include outreach, improve the delivery of pharmacy provision and enable drug consumption rooms, whenever possible.

Rosie Hutcheon was invited to speak as someone who has had contact with the Drug Services. I am here primarily as a mother. I appreciate the opportunity to share some of my experiences and observations as the mother of a seemingly happy child who became consumed by addiction, a process which started in his early teens. He is now 36 and in early recovery, but I know that that may change tomorrow. I am still connected to my son and we continue to support him, but from a distance which allows us all to live our own lives.

As all of us here are aware, addiction is an illness which affects the whole family system. For every person suffering from addiction of any kind there are many friends and family members suffering alongside them. In our family, we have six people close to our son whose lives have been significantly shaped by his addiction: parents, partners, a sibling and a daughter. However, the effects are far reaching, and our relationships with friends and extended family have also been impacted. The evidence is clear that those living alongside active addiction become ill in a way which mirrors the devastation of their loved ones’ lives. Family members gradually adapt to cope with the shame, pain and chaos and, without understanding addiction, they adapt in ways which perpetuate the illness and its impact. They enable their loved ones’ addiction and become enmeshed in their lives to the exclusion of their own needs.

We suffer from chronic anxiety, depression, isolation, fractured relationships, rifts within close family; we develop physical health problems and financial problems; we lose the capacity to maintain employment. My experience over two decades now has encompassed all of these difficulties.

> What is Scotland doing well?

> What could Scotland to better?

> Where should we learn from?

> Where do we want to be in five years?

This report brings the feedback together.

What is Scotland doing well?

Some participants admitted that it can be a struggle to point out what is right, partly because cultural habits mean that we are more used to pointing out what is wrong. That said, the fact that drug use is reducing was welcomed, although the level of harm from drug use was seen as a more important indicator. There was general support for the Scottish Government decision 10 years ago to move drugs policy from justice to health. The framing of the issue as a public health one is positive, and it has helped develop greater understanding and support at local and national level for those addicted to drugs and, more successfully, their families. This has had a positive impact on services. The development of alcohol and drug partnerships, the increasing involvement of families and the building of a recovery community in Scotland were all seen as progressive developments.

There is enthusiasm and commitment among the key service providers within Scotland.

In particular, it was noted that Scotland has had success around blood-borne viruses, with a strong strategy and world-leading research. Equally, the decision to distribute Naloxone has also had important preventive effect and demonstrated that we can make bold decisions. What could Scotland do better?

Services Not enough people are in treatment: more people in treatment will make a positive difference to the number of deaths and the harm experienced in Scotland. The services are not resourced to cope with the full demand – the waiting times for treatment are already too long, and it was suggested that a punishment attitude in the disciplinary discharges may be linked to caseload demands.

Services need to be better integrated, both within the public sector and between the public and voluntary sectors. They also need to reflect the individual needs of the people being treated, partly by building different menus of recovery programmes and learning from people in recovery who have lived experience. They should also involve fewer points of contact for the various services involved.

Where should we learn from?

There were many suggestions of services, places and countries that we could learn from. The housing first approach to homelessness, the River Garden in Auchencruive and the Haven in Kilmacolm were all given as examples from Scotland. In Durham, a new approach has been trialled with police involvement to bring in diversion from prosecution. There are also examples of drug testing for safety in conjunction with music festivals and those involved in the night time economy.

In Europe, the examples of Ireland, Norway, Switzerland, the Netherlands and Portugal were all brought up. Norway has seen a reduced number of drug deaths, partly perhaps from reducing disciplinary discharges from treatment, while safe injecting rooms are running successfully in Switzerland and being introduced in Ireland. Most notably, the example of Portugal was shared. It was noted that the headline approach of decriminalising drugs was also accompanied by a campaign to tackle stigma and provision to increase access to services. A change in the law should not be seen in isolation.

Further afield, the Queensland approach to drug testing in Australia and the decriminalisation of cannabis in Uruguay and US states such as Colorado were also noted. Participants all pointed to the importance of remembering and reflecting on cultural trends and differences in different countries, and being wary of taking simplistic lessons from elsewhere.

Where do we want be in 5 years?

There will be a massive decrease in drugs deaths – As part of that, we will have controlled the HIV outbreak in Glasgow, had a real impact on rough sleeping and enabled people who have problems with substances to connect and reconnect with their communities. Overall, we will not just manage the problems better, but reduce them.

Services will be better run and better delivered – Services, and their budgets, will be more joined-up. They will bring together public and third sector organisations to meet the individual needs of drug users and their families. Person-centred care, with supported employment and family involvement as standard throughout the country, will be the norm. The Haven and River Garden models may have spread throughout the country, too.

Services should be more accessible. Proactive outreach services will enable a single point of contact for the user and their support network and a focus on recovery through peer and community support. As an example, there will be an addictions nurse in every health centre in Scotland, and they will be available to be seen with little notice. More people will be in treatment, and fewer will suffer harm or die.