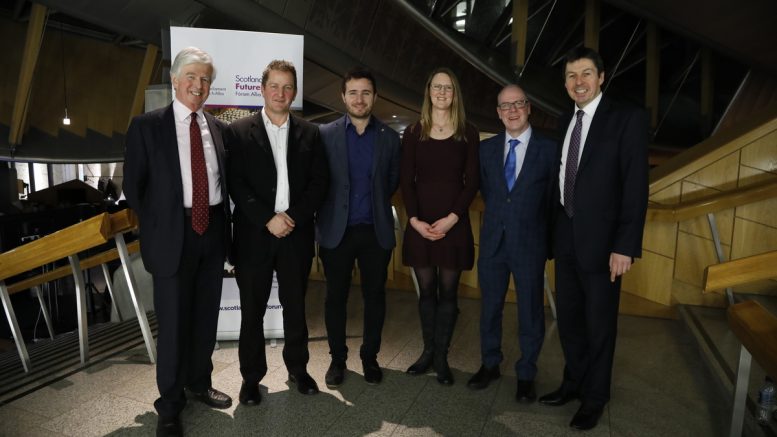 On 31 January 2018, the Futures Forum held a reception to showcase Heriot-Watt University’s academic research behind Social Bite’s ambitious plan to tackle homelessness, along with the social enterprise’s work with others to tackle this long-term problem in Scotland. 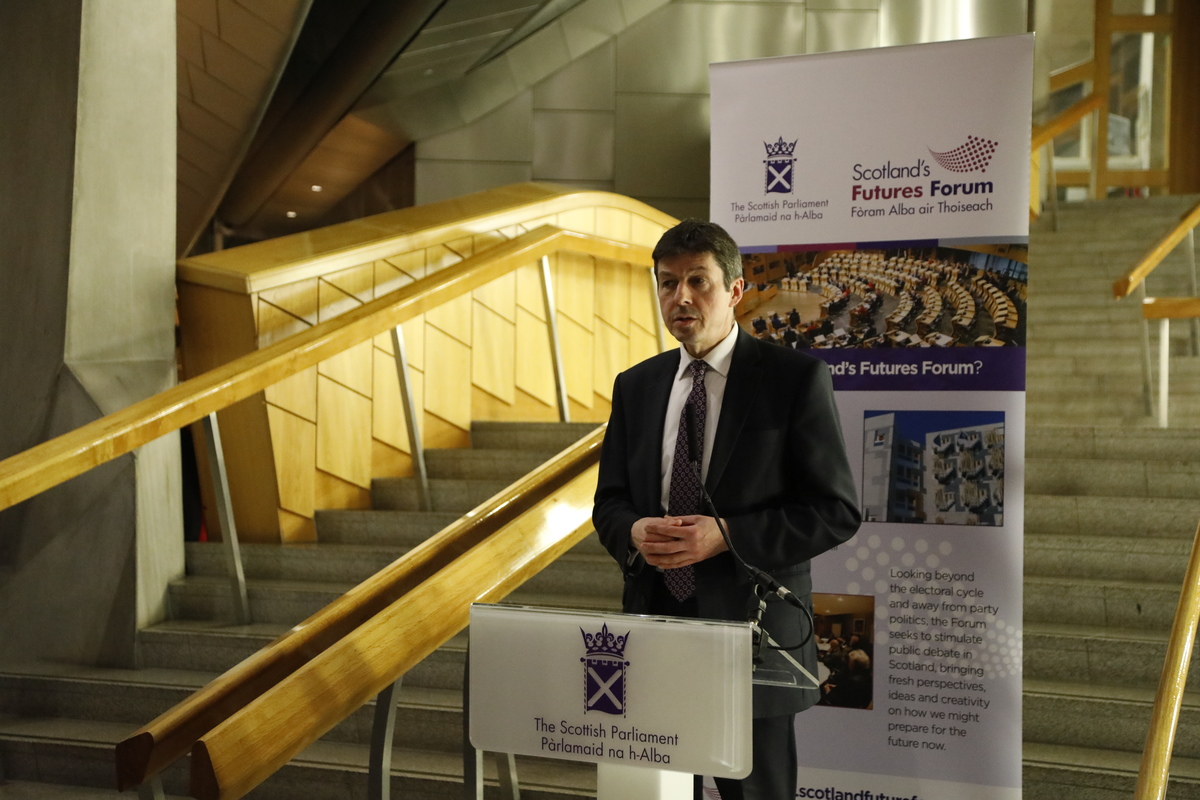 As Chair of the Futures Forum Board Ken Macintosh MSP opened by noting that homelessness is a complex and challenging problem. While good work has been done in Scotland since devolution, there remains much to be done. And behind every statistic is a person with their own, often tragic, story.

The Presiding Officer noted the attention paid to the issue recently, with the Scottish Government homelessness and rough sleeper action group being set up and the Local Government and Communities Committee finalising its inquiry into the issue. By exploring the services currently available, and by speaking to those at risk of becoming homeless or experiencing homelessness, the Committee’s work contributes to the debate on how best to tackle the issue.

Finally, the Presiding Office reminded those present about the people on the front-line who continue their great efforts to help the people affected by homelessness while working to bring about its end in Scotland.

He then introduced one of those people: Josh Littlejohn, a driving force behind Social Bite, a social enterprise that works with people in need, destigmatises them and their experiences, and collaborates with partners to tackle the problem head-on. As co-founder of Social Bite, Josh Littlejohn talked through the next steps of his organisations’ journey to eradicate homelessness in Scotland.

Josh opened by reporting that Social Bite’s Sleep in the Park event in December 2017 raised in the region of £4 million. The most significant area where they planned to use the money raised is to support a major “Housing First” programme.

The “Housing First” approach means turning the homelessness system on its head. Rather than making extremely vulnerable people, often with complex needs, sleep rough or in hostels or B&Bs, it aims to give people a secure place to call home right from the start and then fully support them to sustain their tenancy and integrate into society.

Social Bite’s intention is to start placing people that are currently sleeping rough and in hostels and other temporary accommodation into this mainstream housing from April 2018. They would help develop and support the delivery of significant “wraparound” support with other homelessness charities, so that these vulnerable individuals are fully supported in their new tenancies. Support could range from help with addiction, mental health, counselling, money management, cooking lessons and social activities.

Josh outlined the plan to collect evidence on the outcomes of the programme, particularly linked to tenancy sustainment, positive mental health improvements, and cost savings to local authorities, as well as the cost savings for police, criminal justice and health budgets.

In line with this, Social Bite was also seeking to work with the Scottish Government and local authorities to try to ensure that funding for this “wraparound” support is ultimately mainstreamed, based on demonstration of successful outcomes.

Josh stated that Social Bite will be working hand in hand with the Scottish Government’s “Homelessness and Rough Sleeping Action Group” – of which it is a member – to help achieve this end.

Social Bite funding is aimed to ensure that a significant development of “Housing First” in Scotland is de-risked for local and national government with significant privately raised funding.

Josh Littlejohn finished by noting that there is the potential to bring in many more housing pledges throughout various cities in Scotland, and that Social Bite believes that it can secure at least 1,000 homes to place homeless people in the next two years.

The key challenge is to establish this programme as a partnership with the Scottish Government and local authorities to ensure that the funding to provide support for these vulnerable people in their tenancies is mainstreamed after two years, based on successful outcomes being achieved.

The other key challenge is to bring other funders to the table in the first two years to reinforce Social Bite’s funding. 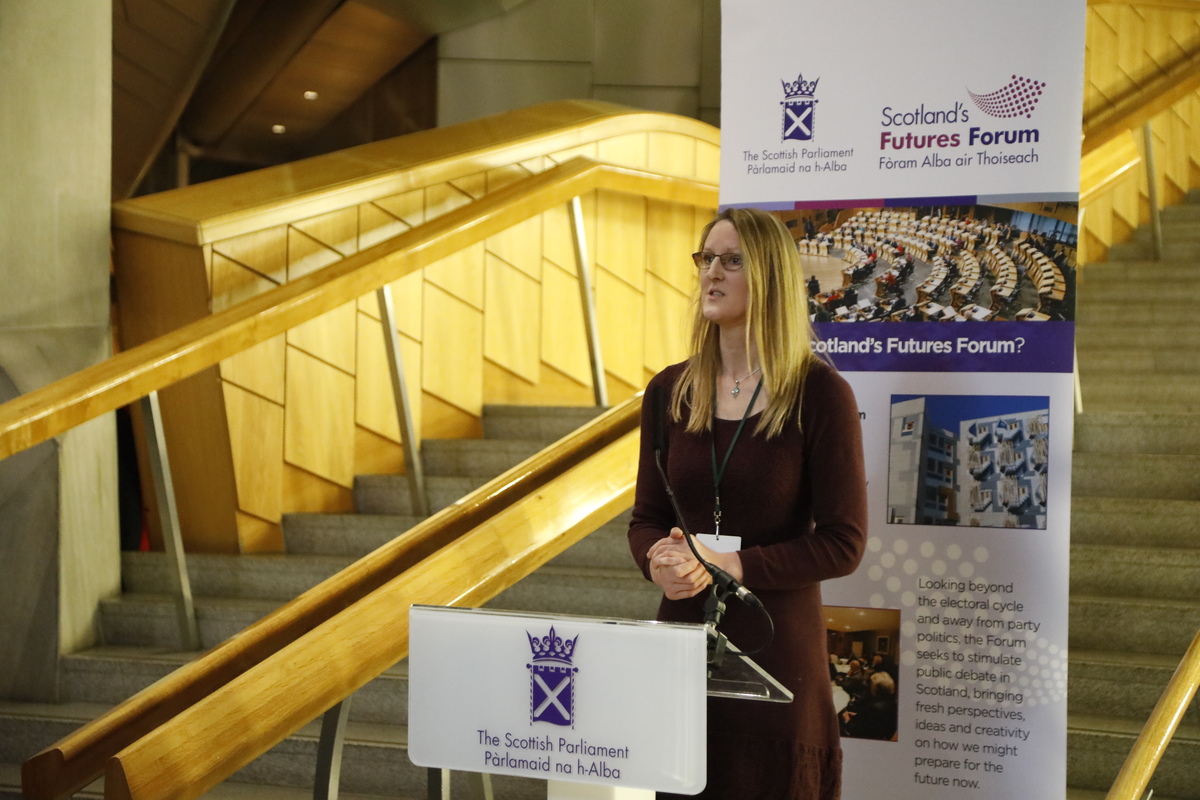 Professor Sarah Johnsen, who has researched the housing first approach, provided her expert view on its benefits:

“I first heard about Housing First almost ten years ago, when I learned about this ‘thing’ that had been developed in the United States and was reporting fantastic outcomes with homeless people who had complex needs.

“My intellectual curiosity was sparked – in large part because this is a group who have historically been poorly served by mainstream services wherever they are located. And the UK is no exception on that.

“And so, I obtained a grant to review the evidence on the effectiveness of Housing First, as it was back then, and assess whether it might be something that was transferable to the UK.

“After burrowing my way through that evidence I concluded that whilst some practical adaptation would be necessary to take account of the different welfare and service contexts here, Housing First looked really promising and should definitely be piloted.

“I did however express some concern at the time about the rhetoric that was being used in relation to Housing First.

“Some key figures internationally, including a number of prominent academics, were arguably being quite ‘evangelical’ about it Housing First – almost going as far as to suggest that it provided ‘the answer’ to homelessness.

“I confess that this kind of language didn’t sit easily with me. I wouldn’t describe myself as a sceptic – but I do take a lot of convincing about the merit of things – especially when those things are likely to absorb a lot of public money

“And so, at that point I actually wrote a paper calling for a bit of ‘agnosticism’ in relation to Housing First – in the hope that that would act as a counterbalance to the evangelical fervour with which its virtues were being extolled at the time … at least until we had the evidence to determine whether or not it worked elsewhere.  Since then a number of things have happened.

“I’ve also been involved with a European Commission funded social experimentation project which assessed the effectiveness of pilots in 10 European nations,

“I remain in regular dialogue with the researchers and practitioners involved with many Housing First programmes in places as far-flung as New York, Adelaide and Budapest

“I have subjected all that evidence and debate to intensive scrutiny over many years – in my usual unashamedly geekish fashion. And I’ve come to the following conclusion: Housing First is an absolute no-brainer.

“The evidence is now so extensive, and so compelling, that any claims that it is not effective really are indefensible.

“As an academic researcher, it’s probably not surprising that I end most of my presentations by highlighting issues that require more research. I am not going to do that today. Because I don’t need to. The sheer weight and consistency of evidence on Housing First is already utterly convincing.

“Yes, there is still scope to further assess how well Housing First works for other subgroups of the homeless population – young people, people with less complex needs and so on. And yes, there are further conversations to be had about how the practical mechanics of Housing First can be tuned to best effect in any specific context

“But actually, we already know that if the core principles of Housing First are adhered to it will work for the vast majority of users … and potentially save the public purse significant sums in so doing. You don’t need me and my fellow geeky academic compatriots generating yet more research to evidence that fact. It’s not evidence that’s needed going forward – its implementation.” Jon Sparkes has been Chief Executive of Crisis since 2014. As Chair of the Homelessness & Rough Sleeping Action Group created by the Scottish Government to find short and long term solutions to homelessness, Jon reported on the group’s initial findings.

What the national and international evidence says

An emerging framework from the Action Group Kevin Stewart MSP opened his contribution by congratulating Social Bite and their housing partners, Edindex and Wheatley Group on taking such a bold and ambitious step to help tackle homelessness.

In recent years, with strong housing rights already in place, he suggested that we have made significant progress in preventing homelessness before it occurs in Scotland. However, the Scottish Government was clear that now is the time to do more, building on the progress we have made to be more ambitious: we want to ensure that everyone, including those with the most complex needs, are supported to secure a home that works for them and to achieve the best possible outcomes.

At the heart of that ambition are principles that are shared by the Housing First approach. Mr Stewart welcomed the proposals being developed by Social Bite and their housing partners on these principles – permanent, sustainable housing with enduring support when required.

He noted that we have all been concerned by the increased visibility of people who are sleeping rough on our streets. It is unacceptable in a country as wealthy as ours, and that is why the Scottish Government is taking measures to address this in partnership with organisations such as Social Bite.

In September, the Programme for Government set out ambitions to eradicate rough sleeping, transform temporary accommodation and end homelessness in Scotland. This will be backed by a £50 million ‘Ending Homelessness Together’ Fund over a five-year period, as well as an additional £20 million in alcohol and drug services.

The Housing First model and the wider principle of rapid rehousing will be an important part of this and potentially a key element in meeting those ambitious objectives. In welcoming the model proposed by Social Bite, Mr Stewart also reflected on the fact that Housing First models are already being delivered with some success in some parts of Scotland.

It is an innovative approach, in which the involvement and views of service users, often with the most complex needs, are central and where partnership working is key to success. The Homelessness and Rough Sleeping Action Group will be able to draw on the positive examples of Housing First in Scotland and elsewhere, such as Finland, where the model may vary.

This will help Government to identify which approaches and models of practice in addressing rough sleeping and homelessness would allow best use of the resources allocated by the Scottish Government through the £50 million Ending Homelessness Together Fund.

Mr Stewart concluded by looking forward to the further recommendations from the Action Group. He said that it is clear to him that success will rely on all of us working together – and that everyone should be assured that the Scottish Government will continue to work with its partners to drive real change and improvement. 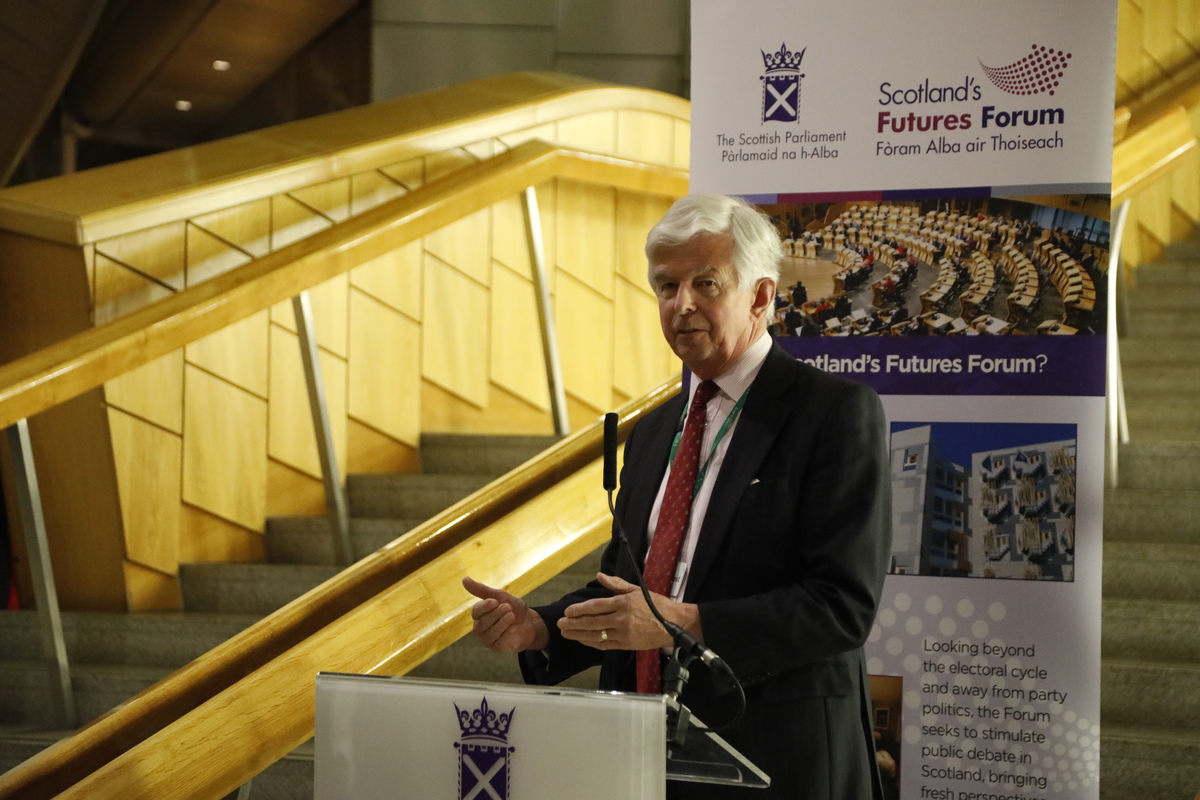 As Futures Forum director and chair of Social Bite’s Programme Board, Sir Andrew Cubie concluded the speeches for the evening by looking forward to both the challenges ahead and the opportunity to make a real difference.