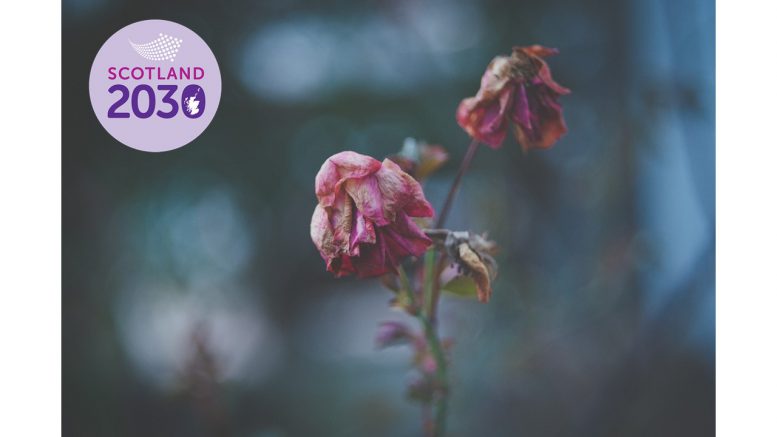 Photo by Silvestri Matteo on Unsplash

Tuesday 6 November 2018, at the Scottish Parliament

The Futures Forum concluded its investigation into life in the future with a discussion on death and dying in 2030 and beyond.

Chaired by the Parliament’s Presiding Officer, Rt Hon Ken Macintosh MSP, this session considered our approach to death and dying in Scotland, now and in the future, and how our cultural relations with death may change by 2030.

Ahead of the discussion, renowned author and broadcaster, and ex-bishop of Edinburgh, Richard Holloway, was invited to offer his thoughts on the taboos surrounding dying and to explore how Scotland’s relationship with death might change in the future.

Richard Holloway opened his talk with the three questions that Paul Gaugin slashed onto one of his paintings when he heard the news of his daughter’s death:  ‘What are we?’ ‘Where do we come from?’ and ‘Where are we going?’  He suggested that these are inescapable questions for us as thinking, reflective beings and as the only animal that is able to contemplate its own mortality.

Until recently, religion was both the interpreter and administrator of death, with most religions having a theory of judgement, be it karma or heaven and hell, that kept death before people’s eyes. With the decline of religion, Richard Holloway noted that we are now more likely to have a doctor by our deathbed than a priest, and that their main preoccupation is to delay our death rather than to attend to our spiritual needs.

While medicine has made great strides in keeping us alive well into our 80s, Richard Holloway suggested this apparent achievement has also had a detrimental effect on society, which is leading to disquiet, as well as a growing ‘revolt amongst the geriatrics’, about people living beyond their time and the medicalisation of death.

Richard went on to state that while we are a clever animal, we are also a very unwise and violent creature; one that invents things without anticipating their impact or consequences. As examples, he pointed to the discarded communities that have resulted from waves of industrialisation, and the wars that have been caused by our discovery and greed for oil in the Middle East. Moreover, with climate change we are now in danger of bringing about the wholesale destruction of our planet and ourselves.

As further evidence of our cleverness running away with itself, Richard pointed to the Silicon Valley billionaires who are advocating processes that will do away with death altogether through ‘cryopreservation’ or ‘longevity escape velocity’, which encourages us to believe that medical progress will start to outpace death. The audience was asked to imagine a universe in which humans don’t die or even a society where people live for 150 years. He suggested that such a world would result in a ‘geriatric apocalypse’, given the impact that we see today from our attempts to prolong life long after it has any pleasure or meaning. Moreover, we should ask ourselves what kind of quality of life we could expect as individuals who could never die but kept physically deteriorating.

As part of his reflection on whether we are reaching the end of our cleverness and unable to accept our mortality, Richard suggested a fourth clause to the following well-known prayer:

God, grant us the courage to change what can be changed
The serenity to accept what cannot be changed
The wisdom to know the difference,
And keep us from the folly of interfering too much with the imperatives and contingencies of nature, lest we destroy ourselves in the process.

Referring to the true story of an elderly woman who gave up her place in a lifeboat for a child after their ship had been torpedoed during the second world war, Richard ended by suggesting that when death approaches, we should be willing to acknowledge that we’ve had our time and depart gratefully.

Role of religion and churches

The discussion opened with a recognition that Scottish society has seen a sharp decline in Christianity and that, while other religions are moving into that space, there is the real possibility that religion will have retreated to a vey insignificant element by 2030. Who then might take up the place of the church in conducting our funerals?

It was suggested that we will always need rituals to mark our key milestones, including death, and that we are likely to see a multiplicity of groups, including religious groups, coming together to fill that vacuum.

Humanists have already started to fill the space being left by the church and it was suggested that their funerals are more likely to celebrate the life lived than to focus on life after death. However, concerns were raised about whether we lose something by abandoning religion and the traditional communal ceremonies used to mark death. Is there a danger of secular funerals trivialising death or failing to invoke appropriate levels of sorrow or grief?

It was suggested that in the future religion could still be used by non-believers to mark death and that a good funeral, be it secular or religious, should be able to celebrate and honour a person’s life, as well as invoke humour and sorrow.

Within this discussion, it was noted that while we have seen the influence of Christianity and religion wane, we are also witnessing a new spirit of kindness which we should nurture to strengthen our communities.

Role of the state

With the decline of religion and the increasing medicalisation of death, the discussion turned to the role of the state in the future. It was suggested that the state should help create the institutions and/or facilities that we need for what we experience around death and dying, including funding hospices.

In addition, it was agreed that we need to review the huge shift in people dying in hospital rather than at home. There point was made that as we face death there is a role for hospitals in minimising pain, breathing difficulties and nausea, but that that medical professions are not trained or equipped to administer to our spiritual needs. As such it was suggested that we should be exploring ways that people can die in their own homes, while maintaining the best medical care on offer.

Some health authorities in Scotland are currently considering how we could build more capacity within our communities to enable families, neighbours and friends to support those who wish to die at home. However, implementing such a policy at scale will require the backing of politicians who are willing to think beyond the next electoral cycle, ignore any backlash from the tabloids, and endorse policies that might not be fully realised within their lifetime.

It was noted that half of the NHS budget is now spent on the last year of patients’ lives. It was agreed that while we want doctors to keep us alive, life should not be prolonged beyond our ability to experience joy or sanity. As such, it was suggested that we should spend less on prolonging life and more on allowing people to experience a good death through, for example, funding hospices.

Concerns were also raised about the number of high-profile cases involving children with life-limiting conditions who have not been allowed to die. It was suggested that, as a society, we are creating a blame culture, stoked by the media, which is impacting on the ability of compassionate professionals to do their job without fear of being challenged or incriminated.

Given that there is a legal right to extend life, a question was asked about whether people should also have the right to peacefully end a chronic or painful condition through legally assisted dying.

Although there has been a recent spate of books written on the subject, death remains a difficult subject. It was suggested that it is particularly important for those with life-limiting conditions to be able to have good conversations about death with someone who has the ability to listen and help them with their planning.

Given that medical staff and care home staff often have to make difficult decisions about resuscitating elderly patients it was suggested that we all have a responsibility to help clinicians and family members by documenting our wishes for end of life care.

Preparing for death, by leaving a letter and resolving differences, also helps those who are left to grieve. During the discussion on grief, it was noted that there has been an increase in very public acts of remembrance especially in relation to the First World War which have been accompanied by a ‘fetishisation of the poppy’. As we continue to send people to wars, it was suggested that such a stance is hard to understand unless it is another instance of people engendering a space where they can note their disapproval to create an ‘us and them’ divide.

It was noted that we need to remember that death can happen at any age and is not the preserve of elderly people. In addition, we need to explore how we teach children about death and mortality, particularly as we live in a society where most children have limited direct experience of death and where a young person’s first encounter with death could be a terrorist incident played out on social media.

Fear of dying is common; however, there was a suggestion that it may be useful to explore exactly what people are fearful of. Do we fear what awaits us in the afterlife? Dying alone in hospital or in pain? Or, is it an existential fear of no longer being here?

It was noted that life fights hard against going and that it is natural to experience a deep sense of loss when we contemplate those experiences which we will not be here to witness, be it the next spring or our grandchild’s graduation.

The discussion concluded with a suggestion that for a good death we need to celebrate that sadness before letting it be.

Richard Holloway is a writer and broadcaster. A former Bishop of Edinburgh and Primus of the Scottish Episcopal Church, Richard has also served as chairman of the Joint Board of the Scottish Arts Council and Scottish Screen, as a member of the Human Fertilisation and Embryology Authority and as chair of the BMA Steering Group on Ethics and Genetics. Richard is a fellow of the Royal Society of Edinburgh and the chair of Sistema Scotland.

Richard has written published more than 20 books, exploring the relationship between modern religion and various issues such as sexuality, drugs and bioethics. His memoir “Leaving Alexandria” won the PEN/Ackerley Prize 2013 and was shortlisted for the Orwell Prize in 2013, while his recent book “Waiting for the Last Bus” has been described by the Scotsman as a “profound meditation on the ultimate inevitability.”

Richard Holloway writes regularly for a variety of newspapers and has presented many series for BBC television and radio. Richard is also a former director of Scotland’s Futures Forum.

This seminar forms part of the Life in Future Scotland series run in 2018 by the Futures Forum.