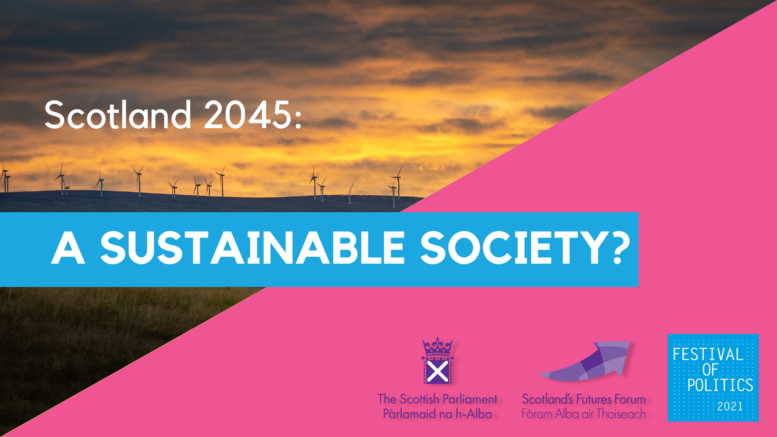 Without changing how we live our lives, we will experience ever more destructive biodiversity loss and climate change in our country, and our planet.

But what does a sustainable Scotland look like? How can we build a society that works for all our citizens? And what changes do we need to make as individuals to bring it about?

The coming months promise to be central to Scotland’s future. Decisions made at COP26 in Glasgow (November 2021), and Scotland’s response, will shape our society, and the lives of Scotland’s people for generations.

Against that background, Scotland’s Futures Forum hosted a panel of leading thinkers. They explored Scotland’s response to the challenges ahead and imagined our future lives:

Zarina Ahmad is a climate leader and campaigner. Since being told that “ethnic minorities aren’t interested in climate change”, Zarina dedicates herself to supporting under-represented groups to work in environmental organisations. Women’s Hour on BBC Radio 4 recently named her as one of the top 30 influential women in environment. As well as many roles in climate organisations, Zarina is currently studying for a PhD on sustainability at Manchester University.

James Robertson is a poet, editor and novelist. His novels, including Joseph Knight, And the Land Lay Still and The Professor of Truth, have won numerous prizes, while The Testament of Gideon Mack was longlisted for the 2006 Man Booker Prize. James’s books have explored various aspects of Scottish history, society and culture, and he has been described as the chronicler of Scotland on more than one occasion. His most recent novel, News of the Dead, came out in August.

Katherine Trebeck is a writer, researcher and an advocate for economic system change. Her main work is on the wellbeing economy – an economy that delivers for people and the planet. Katherine is a co-founder of the global Wellbeing Economy Alliance, and she helped instigate the Wellbeing Economy Governments group, which counts among its members the governments from New Zealand, Finland, Iceland, Wales and Scotland. Katherine recently co-authored the book “The Economics of Arrival: Ideas for a Grown-Up Economy”.

Alison Johnstone MSP is the Scottish Parliament’s Presiding Officer. In this role, she also chair’s Scotland’s Futures Forum, the Parliament’s futures think-tank. Alison has been an MSP since 2011. She represented the Lothian region as a Green MSP before taking on the non-political role of Presiding Officer after the 2021 election.