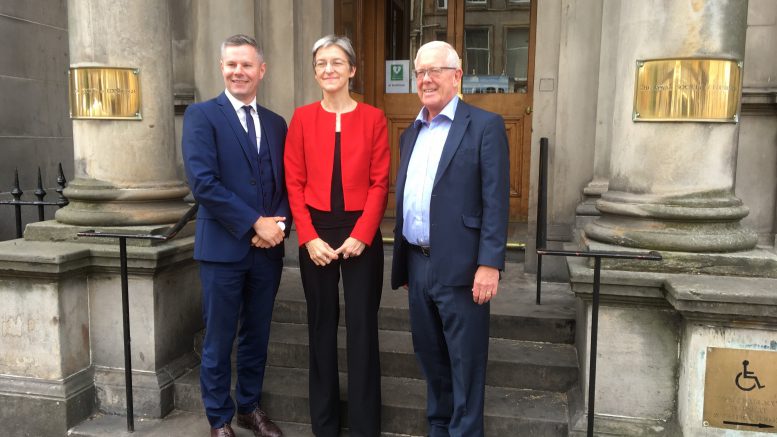 On Friday 15 June 2018, the Futures Forum, the Scottish Parliament’s Finance and Constitution Committee and the Royal Society of Edinburgh brought together a group of experts from throughout Scotland to consider the long-term sustainability of Scotland’s public finances. Click the image above to read the event report

The seminar took place on the back of Scotland’s new budget process. This process is designed to include a long-term outlook and focus more on prioritisation, addressing fiscal constraints and the impact of increasing demand for public services.

As part of the process, the Scottish Government published a Medium-Term Financial Strategy for the first time on 31 May 2018. At the same time the Scottish Fiscal Commission published revised forecasts for devolved tax revenues and Scottish onshore GDP growth forecasts and demand-led social security expenditure.

With this information, this seminar considered the Scottish Government’s expectations on the outlook for public finances over the next five years and explored the long-term sustainability of Scotland’s public finances.

Participants heard from Derek Mackay MSP, Cabinet Secretary for Finance and Constitution, along with a panel discussion featuring: Cabinet Secretary Derek Mackay MSP talked through the Scottish Government’s recently published Medium-Term Financial Strategy. He reflected that, as the Scottish Parliament gains control of more economic and fiscal levers, this is a good time to consider the financial outlook for Scotland in the context and framework that it is operating within.

Given the situation, Mr Mackay noted, we have to grow our economy in a sustainable way. We have to improve our productivity, wage earning and participation levels in the workforce. He noted specific interventions that he believed will make a difference, including an expansion in childcare entitlement, investment in digital and the infrastructure of our future, and in skills, 50,000 new affordable homes, private sector growth support, and work to tackle the attainment gap, social exclusion and inequality.

Overall, he said, there is a real focus on productivity, participation and population.

As Auditor General for Scotland, Caroline Gardner is responsible for auditing the Scottish Government and public bodies in Scotland and reporting to the Scottish Parliament. Her contribution provided some context to the discussion, along with an outline of some of the opportunities and challenges facing the public sector in Scotland.

As well as significant new tax-raising powers, the Auditor General pointed out that Scotland has new powers over borrowing and reserves for the first time, and responsibility for 11 social security benefits that are worth around £3 billion. The proportion of devolved spending that is raised directly in Scotland increases about fivefold, from around 10% of spending in 2014-15 to around 50% as all the new powers come into effect.

Ms Gardner pointed out that the Scottish Parliament is therefore moving from a spending parliament to one that balances spending with revenue raising in much more complex ways. Her key message was about the impact of that complexity and the related uncertainty. The Auditor General noted that the state of Scotland’s economy will influence both the money available for spending and investment and the level of demand-led spending. Economic growth is therefore important to the sustainability of Scotland’s public finances.

Ms Gardner suggested that the Parliament should ensure that it has , and how the revenues, borrowing, spending and reserves all interact. On top of that, there needs to be longer-term thinking to understand how things are likely to change, and a balance between short-term flexibility and long-term direction.

To meet the challenges ahead, Ms Gardner noted the importance of a a good understanding of the economic and fiscal context, along with sound foundations for fiscal policy through, for example, strong budget institutions, disciplined budget allocation processes and a structured approach to the Government’s balance sheet. As chair of the Scottish Fiscal Commission, Dame Susan Rice spoke about the Commission’s recent economic and fiscal forecasts.

Dame Susan explained the Fiscal Commission’s approach to forecasting and what could be expected as the new budget process  develops, with regular revisions as new data becomes available.

Dame Susan described the the outlook for growth in Scotland as subdued. On a positive note, the SFC’s forecast is that the economy is growing: unemployment is expected to remain low, with employment continuing to increase over the next five years. However, the SFC’s view remains that an overall pattern of slower growth is likely to persist for the next five years. Poor productivity growth and a declining population in the 16 to 64 age group are the most significant factors, although Brexit also contributes to the outlook.

Professor David Bell, Vice-President of the Royal Society of Edinburgh and Professor of Economics at the University of Stirling, covered the people-related challenges: ageing, migration and skills.

Professor Bell noted that the the Scottish population is changing: the number of those aged 0 to 15 is declining slightly; the working age population is declining slowly; and the older population is increasing quite rapidly. He highlighted that at the moment, there are 1 million people aged over 65; by 2031, there will be 1.5 million. This brings a rapidly changing workforce, and Professor Bell suggested that we have to think about an economy in which a third of the workers are over 50. Representative Levels of Tax and Spend over a Lifetime

Professor Bell also presented a graph showing representative profiles for tax revenue and public spending over a lifetime. With this analysis, he said, we can question our spending decisions. For example, education spending peaks early in the lifecycle—should we be spending all our money in the early years? Is there a case for much more part-time adult education?

Jeremy Peat, the vastly experienced economist, spoke as Vice Chair of the Royal Society of Edinburgh Business Innovation Forum. His contribution focused on the macroeconomic outlook, which he noted was not starting from a positive situation. With low growth and reduced tax revenue forecasts, the budget is going from tight to tighter.

Mr Peat shared his thoughts on what should be done:

The post-presentation discussion focused on the dangers of inertia in public spending, the challenges and inequalities in social care funding, and the underperformance by Scotland in productivity during this century.

Workshop groups considered Scotland’s strengths, weaknesses, opportunities and threats, along with the priorities for action. These included calls to:

The event will contribute to the Parliament’s consideration of the Scottish Government’s budget and provide a longer-term context for the discussions in committee.