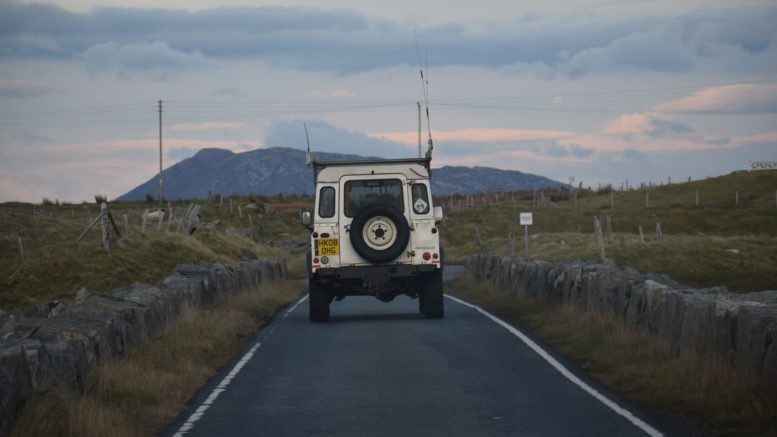 Photo by Ma Ti on Unsplash

In this blog, writer Iain Finlay MacLeod gives us some creative writing full of dystopia – and some hope? – about Scotland’s future.

In 2035, the company Amazon bought all of Scotland from the British Government.

At that time, the greater part of the country had been bought by various wealthy people and companies in any event. Although different parts of it, the towns, for example, still belonged to the Government in Edinburgh, or to the people, as it were.

It was difficult to ascertain who owned those companies and they were kept secret through shell companies in the Channel Islands and the Cayman Islands, amongst other places.

Then there were no public services left and Amazon offered a sum to the British Government, as well as a salary to everybody in Scotland, and they wouldn’t have to work for it – Basic Universal Income.

The British Government did this for various reasons. The first reason – because they could. The second reason, because it was possible for them, with support from Facebook, to make it happen. The third reason, it made money for some, seriously big money.

There were very few people left in the Islands and the Highlands then. Crofting was gotten rid of when the leases for crofts started selling for 400k in Skye and elsewhere. Politicians had learned that they could do what they wanted in the ‘20s anyway, and that nobody could stop them.

The war had been going on for more than a dozen years too and people were poor. The Chinese empire had overtaken the American empire in various ways – the Yuan was now the main Reserve Currency. America had shut down many of its overseas bases, as had Britain, and Holland before them in previousgenerations. British money had dropped seriously in value. But fortunes were still being made, the like of which had never been seen before.

Elon Musk reached planet Mars in 2026. Blue Origin weren’t far behind him, and as Musk had said many times previously, they weren’t about to adhere to laws that were made on earth, on another planet. In 2028 two starships went back with mining equipment.

In 2030, they had an army on Mars, and they started selling plots to people seeking to make their fortune. They discovered lithium and uranium there, and instead of bringing that back to earth, they kept it and started terraforming. There were five companies in charge of most of the red planet.

People hoped that the fortunes being made on Mars would pay people, and that they would never have to work again. As AI had become so powerful and had gotten rid of so many jobs, people hoped that there would be money from the companies’ debts. But there wasn’t.

And that’s when the idea of selling off Scotland started.

To begin with, nobody listened. Where the idea came from nobody knew, but people started writing about it, and it began to appear in social media and occasionally in the Metaverse.

Everybody had a perfect virtual world now, if they had the money. Some of them had decided to live entirely in a virtual world. And those companies were now so good at making people think what they wanted, that they had power over mankind never seen before.

There were various things that were attractive about Scotland – the weather, it had oil which was still being used in large parts of the world. It was close to the shipping channel through the Arctic, which shortened the route to China. There was lots of wind-power, to make power to create crypto. And, there was Uist.

Uist was important as it could send sub-orbital rockets up into the skies. Various locations were now unsuitable for this, because they were too warm, or had been wiped out. Anyway, this was attractive to Blue Origin and Amazon.

And, anyway, Scotland was sold. The money was paid in crypto currency, and, unfortunately, the value of crypto went down when somebody discovered how they could break the block-chain.

In Uist, they forced the people to leave the island and they all received money and land in Canada. But not everybody wanted to leave – especially the people involved in the great never-ending war. These were hardy people, and they were promised land and a livelihood for all they had done. And they didn’t receive that.

One night, one of those people, a woman called Maggie the Pounder, took out a small axe and wire-cutting materials, while her kids were asleep.

Folk began to follow her through the village, out to the machair – where she cut the fence and the folk started sharing out the land amongst themselves, thinking to break up the tack into parts. They did that, the rockets on the horizon.

They built wee huts for themselves and began, that very day, to plant potatoes. You could hear laughter, the children running about and playing. They made do with what they had and they brought out any weapons that were left from their time in the Army.

And they got ready for what was coming.

Iain Finlay McLeod is from the Isle of Lewis in the Western Isles of Scotland.

Some of his plays are ‘Whisky Galore’, ’Somersaults’ (NTS), The Bends (RSAMD), ‘The Devil Masters’, ‘The Pearlfisher’, ‘I was a Beautiful Day’, ‘Broke’ and ‘Homers’, (Traverse Theatre, Edinburgh).

Iain Finlay wrote ‘St Kilda – The Opera’, a large-scale multi-discipline theatre piece which was shown at the Edinburgh International Festival in 2009. This was shown simultaneously in five different countries in 2008.

He was an Associate Artist at the National Theatre of Scotland from 2013-2015. He was the Robert Louis Stevenson Fellow in 2009-2010. He was writer-in-residence at Sabhal Mòr Ostaig, the Gaelic College in Skye, for two years. He was also Associate Playwright at the Scottish Playwright’s Society for two years.

Iain Finlay McLeod is currently working on a play called ‘Archipelago’ with the French theatre company ‘Eolie Songe’, which brings together twenty-five actors from France, Spain, Turkey and Greece.

To mark Seachdain na Gàidhlig in 2022, the Futures Forum asked several Gaelic speakers to share their views of the future. The project, run with support from the Scottish Parliament’s Gaelic Officers, aimed to contribute to a vision shared at a Futures Forum event on the future of Gaelic in 2019: a Scotland where “Gaelic is visible and audible in public life, with Gaelic routinely used for non-Gaelic issues”.