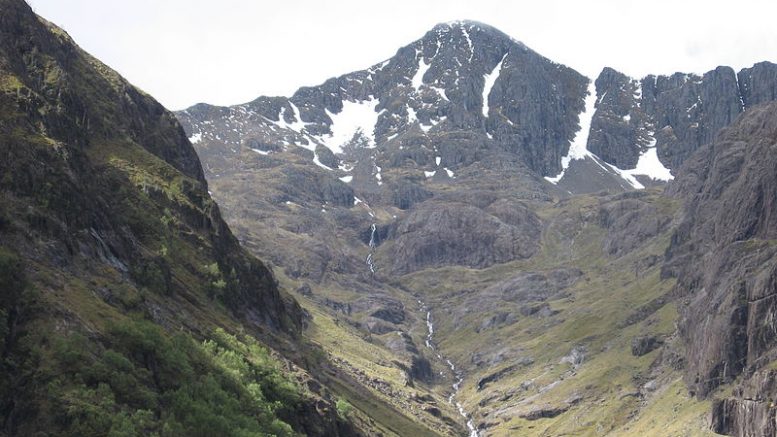 I began my last post by describing the view from my Futures Forum desk. Looking past my computer towards Arthur’s Seat and Salisbury Crags, I received what Neal Ascherson describes in his beautiful and illuminating book, Stone Voices, as ‘a lesson in the unimaginable forces and lapses of time which have gone to shape the world’.[1] According to Ascherson, this is a lesson first received by the early Victorians, thanks to a young naturalist from Switzerland named Louis Agassiz, together with Charles Maclaren, first editor of the Scotsman. On 7 October 1840, Maclaren published Agassiz’s findings from a recent expedition to the Highlands, in what would prove to be ‘the exclusive revelation of the biggest story on earth’ at the time. [2]

Agassiz had noticed that certain parts of Scotland resembled the Alpine landscapes of his home country, and embarked on a comparative geological study which would effectively allow the Scotsman to ‘scoop the Ice Age’. [3] From this article, ‘the entire British public learned for the first time that there had been an Ice Age in their own land and throughout the northern hemisphere’.  [4] This realisation was profoundly important to the scientific community of the mid-19th century, and a wider public fascinated by the origins of the earth and its human inhabitants. Agassiz’s findings provided a clearer understanding of Scotland’s distant past, and the publication of his theory by the Scotsman consolidated Edinburgh’s reputation as the home of leading scientific intellectuals and a source of ground-breaking research. Paradoxically, some might say, Scotland’s ancient rugged geology positioned Edinburgh as one of the most modern, advanced and ‘civilised’ cities in Europe.

This story seemed particularly pertinent to my investigation into the cultural significance of space, place and landscape in Scotland, because it highlights at once the way in which Scotland’s identity as a seat of learning and culture is so intimately tied to its geology, and to the striking visibility of that geology itself. Can we talk about Scottish life, and Scottish culture and history, without thinking of its distinctive geology? I want to dwell a little on Ascherson’s book in this post, because it explores precisely this question, and helps us see how our relationship to the landscape has evolved. As Ascherson explains, the visible geology of much of Scotland has had far-reaching effects on Scottish culture and society. Scotland’s rocky terrain and sometimes extreme conditions dominated the patterns of living of its early human inhabitants, determining the places they settled and the ways in which they organised their communities.

At the same time, Scottish land proved uniquely amenable to the preservation of traces of human settlement and activity. Ascherson likens Scottish earth to ‘a skin over bone’, or a ‘taut face’, which ‘never loses a line once acquired’,[5] suggesting that everything humans have done – every journey they have made, every structure they have built, every animal they have raised or field they have cultivated – has been recorded in the land, even if we can no longer interpret the evidence of those activities as such. We should therefore think about the landscape we encounter today as the combined product of geological processes which have taken place over millennia, and the traces of hundreds, perhaps thousands of years of human activity. In fact, Ascherson argues, the actions of past humans have become so tangled with the ‘natural’ that most modern Scots ‘cannot call up a vision of their landscape which does not bear the mark of man’.[6]

Even Agassiz, back in the 1800s, probably couldn’t have done, for by the time he was conducting his research the Highland Clearances were well under way, with the enclosure of hunting estates and increased grazing by sheep gradually preventing the regeneration of mature woodland, much of which may have been
felled in the first place by early agricultural societies after the last great glaciers retreated about 15,000 years ago. But even if Scotland was once ‘a land whose forests had not yet been felled and where only a few hunter-gatherer bands of humans went warily to the river-crossing for fear of bears and wolves’, Ascherson stresses that there is no ‘quintessential’ state when it comes to landscape.[7]

According to him, ‘the trace of what a glacier did to this landscape half a million years ago, and the trace of what a coal mine did to it a hundred years ago’ are equally important aspects of Scotland’s identity.[8] In other words, we should be wary of attaching arbitrary value to certain types of landscape because we imagine them to be examples of pristine wilderness. Even Scotland’s darkest forests and most remote glens represent complex amalgams of human and nonhuman activity Using one of Ascherson’s stony metaphors, I will finish by suggesting that this kind of discussion helps ‘open up quarries in the past which could serve to build a future’.[9] A little excavation into Scotland’s relationship with landscape could help us challenge those assumptions which limit the possibilities we are able to envision for the landscapes of the future, and help nuance discussions around conservation and environmental protection.