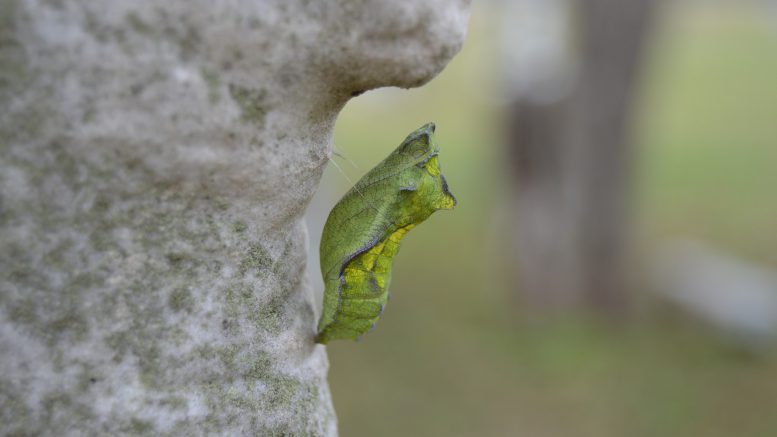 The winning entry – “Chrysalis” by Laura Scotland – is reproduced below, along with a reading by the actor Debbie Cannon.

Edith drifted in and out of sleep. She was curled up on the old leather sofa, enjoying the warm, delicate weight of the baby on her chest. The faint sound of the kitchen radio drifted down the long hallway and the bright winter sunlight streamed in through the bay window, forming pools of golden light on the wooden floorboards. The baby was one week old. If Edith moved too quickly the dull ache between her legs would quicken to a bright flash of pain, but she was comfortable now with her knees slightly raised and her head propped up on a cushion so she could see the rowan trees in the front garden. She kept her arms folded protectively round his tiny body while he slept, relishing the tickling flutter of his heartbeat against her chest and the soft wisp of breath on her neck. Tiny white bumps had formed across the bridge of his nose and his papery skin had taken on an orange tinge. The midwife had assured her that this would disappear in a few weeks’ time, along with the funny little folds of his upper ears, still crumpled from the way he’d rested in her womb. She lifted a finger to gently stroke his misshapen ear, then closed her eyes in the sunshine. The sun was good for his skin. It was falling directly onto the sofa, swaddling them both in a pocket of peaceful warmth, and through her lashes Edith could see the twinkle of damp rowan leaves fluttering in the front garden. Zara would be home soon, but for now it was just the two of them. She smiled, then closed her eyes and slept.

Edith was wakened abruptly by a sharp bang on the window. It was Zara. She was standing next to the rowan trees, peering in from the front garden. Edith smiled at her sleepily, but Zara’s brow was creased into an unhappy scowl. She jabbed her finger at Edith and her head bobbed as if she’d spoken, but the window muffled her voice and her mouth was hidden by the black respirator covering her lower face. Edith shifted her body and winced at the sudden rip of pain. The baby stirred and right away she could tell from his tense movements that he was going to cry. His voice flooded the living room just as Zara opened the front door. Edith rose carefully and began gently bobbing him up and down, singing comforting words into the folds of his crumpled ear. Zara’s heels tapped loudly on the floorboards as she walked past the living room and Edith listened as she went to the WC to wash her hands. She sang and rocked the baby as she waited, then turned as Zara appeared at the living room door, statuesque and beautiful in her long, tailored coat and high heels. They regarded one another for a moment and Edith felt painfully self-conscious of her creased pyjama bottoms and unwashed hair. Zara removed her respirator but remained in the doorway at an awkward distance. Edith already knew what she was going to say.

It was an accusation rather than a question. Edith continued bobbing the baby, using the movement as an excuse to turn away from Zara’s piercing gaze. Her dark blue eyes were startling against her brown skin, like tiny panes of stained glass. Edith and Zara had met in Glasgow Cathedral in 2021. Edith had been restoring one of the remaining Munich windows and Zara had been viewing the venue with her fiancé. It was before the public mask enforcement laws when you could still see the faces of strangers. The light of the stained glass on Zara’s smoothly sculpted face had taken Edith’s breath away, and when Zara noticed her staring she’d struck up a conversation on Nasir al-Mulk Mosque in Iran. By that time Edith was already most of the way in love, and before Zara’s fiancé had finished drinking tea with the priest they’d already had an impulsive but deeply spiritual fumble in the lower church.

Nine years and two global pandemics later, it was hard to believe they’d ever been so reckless. Zara put her respirator down on the lamp table and waited for Edith to answer. Edith continued humming gently until finally the baby began to settle. She felt a small flush of triumph and then turned to Zara.

‘I closed my eyes for a bit, yeah. What’s the problem?’

‘What’s the problem?’ Zara repeated. ‘The problem is that the doctor said we shouldn’t fall asleep with the baby! He could have slipped off your chest on to the floor and hit his head, or you could have rolled over and suffocated him. Not to mention all the germs you’ll be passing to him! Haven’t you been listening to the news today? There were three more cases of Iberian Measles reported in Fife this morning! We’ve talked about this Edith, he should be in his Chrysalis!’

Edith frowned, then glanced at the white pod in the corner of the room. It was egg-shaped, about the size of a Moses basket, made of smooth white plastic. On the top there was a touch screen display next to a small window. Along the side, embossed in flowing script, was the word Chrysalis. A lump formed in Edith’s throat and she rubbed her nose lightly against the top of the baby’s soft head.

‘He doesn’t like it in there, he just cries.’

Zara pressed her lips together. She turned to the pod and selected an option on the display. The seal around the circumference opened with a hiss of trapped air, and the top half slowly opened on a hinge. Inside the pod was stark white and cushioned, with sensor pads and a panel of softly glowing screens. Zara scrutinized the interior, then closed the lid and scrolled through the readings on the display.

‘There are no faults. All the diagnostics are clear. And it says that he’s only been inside for ten minutes today.’ Zara’s paused to raise an eyebrow at Edith. ‘He won’t get used to it if you keep taking him out every time he cries.’

Edith looked around Zara’s shoulder at the report on the glowing screen and her chin began to quiver.

‘I know, but I can’t help thinking he must be lonely in there. No one touching him or talking to him. Isn’t contact meant to be good for babies?’

‘Of course it is, but so is keeping him healthy! Remember what the doctor at the Chrysalis clinic said? It can take time for baby to get used to the pod environment, and some individuals acclimatize more quickly than others, but all of them… do you hear me Edith? All of them, do eventually settle in. Babies are remarkably adaptable!’

Edith fought back her tears and nodded as Zara went on.

‘Inside his Chrysalis is the only place we can be sure that he’s safe. It controls temperature and O2 levels; it filters toxins and micro-plastics from the air; it feeds him when he’s hungry; rocks him when he’s tired; and monitors his vitals constantly. If he so much as sneezes it shows up on the daily report. Imagine we’d had this technology seven years ago! If every new-born had had access to a Chrysalis pod when Pnuemo-10 spread from Sub-Saharan Africa the infant mortality rate would have been zero. Zero, Edith! Five thousand babies died in Scotland alone!’

‘And then there was Equine Flu in 2025; that was a complete shambles! The NHS made the vaccine available too early and the side-effects caused more problems than the actual virus!’

Edith sighed. She had heard all of this at the Chrysalis clinic when they went for their consultation. She’d had her doubts about the pods then too, but everyone had been so confident and reassuring, and there had been so many statistics to back up what they were saying. Zara had absorbed them all like a sponge. Edith’s doubts had been pacified, but once home her faith in their comforting words had begun to flake away. She turned to Zara, reluctantly.

‘But what about getting to know us? How we sound and smell? How we feel?’

Edith shrugged. She was starting to feel a bit foolish. Zara shot her a funny look, then swiped at the controls. ‘Look, if you’re worried about the baby getting to know us there’s an option to upload photos and voice clips. You could record yourself singing a lullaby or something like that, and the Chrysalis will play it at naptime. On repeat, if you want, all you need to do it program it in. And all of your photos are available, too. Just choose what you want. Look, here’s one of both of us from our trip to Shiraz.’

Edith shifted the baby in her arms and looked at the photo on the screen. She and Zara were standing in the mosaic light of the Pink Mosque’s famous windows. Their hair and skin were stained a multitude of shining colours. Edith was looking directly at the camera but Zara’s face was turned, smiling at Edith. The lump in her throat returned and her voice cracked as she spoke.

Zara reached out and gently squeezed the baby’s foot. ‘Me too,’ she said.

Edith knew that Zara wasn’t really angry. She was worried; everyone was. She nodded, then turned to the Chrysalis and gently placed the baby inside. He made a series of urgent hiccupping noises and flapped his limbs, but he didn’t cry.

‘He’ll cry as soon as you close it.’ Edith replied, wearily.

Zara lowered the lid. When the seal engaged Edith felt her insides thicken and turn to something like cement. She could hear his little chirps and gurgles quicken and he began to cry, just as she knew he would, but Zara was unfazed. She adjusted the controls to show his vitals, then lowered the volume so that his voice was no more than a whisper of background noise.

She looked up at Edith and her dark blue eyes glinted.

‘Don’t look so worried. It’s a Chrysalis, not some bog-standard NHS Nest. He’s getting the best start that money can buy! Now come on, I’m meeting Sandeep for dinner and you’ve got that lecture at the GSA tonight. Scottish Urban Landscapes in Glass, right?’

‘You’d forgotten? But you’ve been preparing for months!’

Edith shrugged. She was flicking through photos on the Chrysalis display. She swallowed and then managed a weak smile. ‘I am ready for it, really. It’s a lot to get used to, you know; a new baby. And life just keeps going on as if nothing’s changed.’

‘I know it does, but you’re doing a great job.’

‘Of course I do! Look, I’m sorry I banged at the window and gave you a row about falling asleep. Work’s been a nightmare and all this change is, well… You know.’

‘We’re really lucky. You know that right? If we were in Eastern Europe or America we would never have been allowed to conceive.’

‘Come on, let go get ready. And don’t worry about the baby. I’ll drop him off at night nursery on the way to Sandeep’s. Don’t forget your respirator this time, I don’t want another fine!’

Edith was still fidgeting with the controls on the Chrysalis, adjusting the colour of the background lighting from soft pink to yellow and back again. She stopped, then stroked the hard plastic of the window where she could see the baby’s face, pinched and scarlet from crying. She scrolled through his vitals on the screen, which all read as normal. Finally, she took a deep breath and then turned away.

More information about the competition is available here: