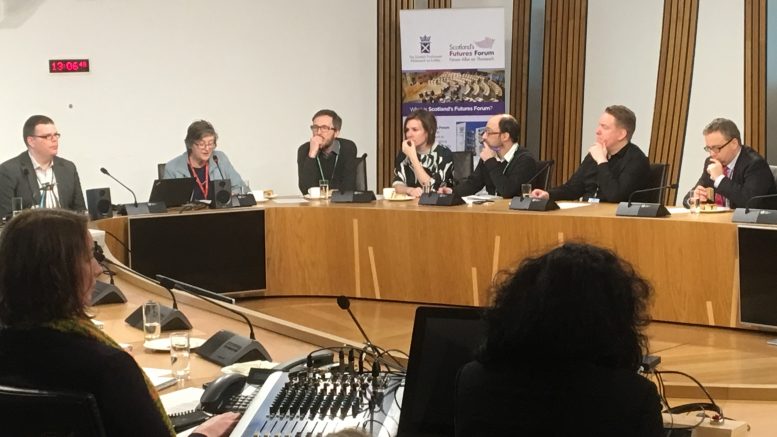 9 February 2017, at the Scottish Parliament

The best in European democratic innovation was presented at a seminar in the Scottish Parliament hosted jointly by Scotland’s Futures Forum and Nesta. Pioneers from across the continent brought their experience of how digital tools can transform local and national democracy and their thoughts on the challenges that lie ahead.

Chaired by Futures Forum director Claudia Beamish MSP and Nesta’s head of policy in Scotland Peter McColl, the event provided an opportunity to discuss some of the opportunities and challenges of digital democracy in Scotland.

Built on collaborative decision-making platform CitizenOS.com, the platform provides infrastructure for a crowdfunded right to address the Estonian parliament, supporting discussions and the development of policy and legislation.

Nicolas Patte, head of communications for Cap Collectif, talked through the work done with Parlement et Citoyens, a French initiative to enable citizens and parliamentarians to work together to find solutions to the problems of their country.

Along with the key performance indicators of transparency and free speech, he pointed to the importance of involving legislators as individuals and a decision cycle that explores options and explains decisions, particularly when they go against the proposal from those involved.

Next, Ari Brodach described the participatory budgeting process adopted by the City of Paris, which has committed €100 million in each of the next five years to projects initiated and decided on by the city’s citizens.

The criteria for the projects are that they must be capital investment in public area or municipal facilities, they must fall within the city’s competencies, and they must fall under general interest. Of the €100 million, €30 million is kept aside for low-income neighbourhoods and €10 million is dedicated for school projects.

Ari talked through the process for allocating the funding, from the discussion of ideas at workshops and their submission via an online platform, to the co-construction and development of the project online. A vote both in person and online follows, before the successful projects are implemented, with their progress tracked online.

Ari also emphasised the importance of transparency as part of the empowerment, noting that the major challenge was to show the results of the process – making it real!

Based on a belief that citizens must have a strong voice in policymaking, the Citizens Foundation has developed open source tools for participation. In an attempt to avoid problems with tone and content of debate in social media, one tool splits contributions into two columns – for and against – to encourage people to make their case positively rather than just respond to someone else’s comments.

The discussion that followed covered questions of online security, especially for voting, the challenge in facilitating positive discussions online and the steps that the Scottish Parliament could consider taking in this area.

Teele Pehk is chief executive officer of the Estonian Co-operation Assembly. Teele is a central figure promoting co-creation and e-democracy in Estonia and is leading online and offline advocacy efforts to involve the country in a new national citizen initiatives platform known as Rahvaalgatus.ee.

Róbert Bjarnason is co-founder of the Citizens Foundation in Iceland. He is playing a central role implementing software and broader methods for digital crowd-sourcing and participatory budgeting across the country.

This seminar was part of an occasional series on digital democracy. Information about other seminars is available here: