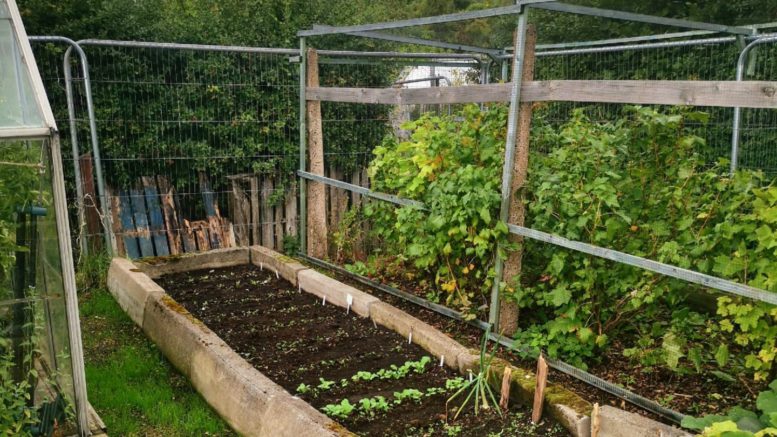 In this blog, broadcaster and ‘gardener of sorts’ John McDiarmid looks at how allotments contribute to community, wellbeing and the environment in the city, and the benefits of growing our own food.

My hands are full of mud as I bend down on the allotment, the noise of the M8 running like a stream. But underneath, we, the people who plant and grow vegetables, are making the most of a good day.

Broad beans and garlic – which should have been in the ground long ago – is what I’ve planned. They, along with Swiss chard, will go into every dinner in summertime.

I’m an allotmenter, a gardener of sorts.

Seven years ago, between frost and thaw, a Saturday morning in October, I filled a flask with coffee and jumped on the bike. I was heading for Riddrie. My destination, Kennyhill Community allotments on the west side of Glasgow to help friends. They had a new allotment and were building raised beds.

Hours on end dismantling old pallets and putting them to use again, and I was hooked. A wee village in the big city. A village created by hard work, not money.

Lots of it is like something out of Mad Max – sheds made out of old metal from the back of fridges, glasshouses with foundations from old tenement toilets, decorations hanging from trees to keep away the pigeons.

But more than the place, it was the people. Everyone was so nice and helpful. And they were all there for some reason or other – looking for a corner to themselves for shelter and growth.

I put my name on the waiting list that very day.

This is my sixth year there. Six years of challenges, of progress, of a step forward and a step back. But every year I’m learning, every year I’m more easy, and every year – improvement.

The soil is black and brown and fine now. It breaks in my hands like sweetbread in the bowl. Running through my fingers, reminding me of every day that I’ve spent here – on my own, with friends.

I am proud of this earth, how productive it is. How much we all put into it, how much we get out of it.

Because of the people, because of the earth, I’m so attached to this place in a way I wasn’t before I got the allotment.

It’s not mine, however. And that’s the best thing about it. The Council owns them. They were created in the middle of the First World War. Every allotment big enough to allow a family of four to provide their own food. A hundred years of people looking after them, adding their own to it, getting their own from it, till somebody else comes along after them.

The sun is breaking through after I’ve planted the beans, the wind getting up a wee bit and blowing the flag above the shed. A flag with the crest of the Land League on it. They were the people who came together to give crofters a voice, strength and power when they were fighting for land of their own in the 1880s. People power will overcome, as they say.

The waiting list has grown since I came here. In some parts of Glasgow, you have to wait ten years to get an allotment. There aren’t enough of them in the city, and the same is true in all of Scotland. But there’s plenty of vacant ground.

A new law was introduced in 2015 requiring Councils to outline how they would create more places to grow local produce. But that change has been slow and small.

There’s another date on the distant horizon, 2045. The goal of capturing as much carbon as we release. At Kennyhill, the environment, recycling and local growth are at the heart of everything we do.

If we want to create a country that’s sustainable and fair, provide community land immediately. Allow them to open new places for people throughout the country. Crofters never got anything by waiting for the grace and kindness of the laird. Before 2045 comes, everybody wanting to, should have the opportunity to put their hands in the mud and grow their dinner.

Iain MacDiarmaid is from the Isle of Skye and now lives in Glasgow. He runs a media company and makes programmes and podcasts. He can usually be found on his allotment, in the garden or out with the dog.