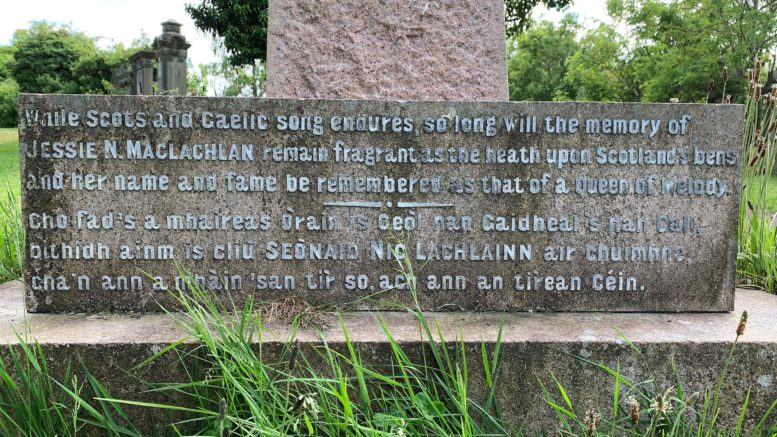 In this blog, musician and broadcaster Mary Ann Kennedy looks back at the life of renowned Gaelic singer Jessie MacLachlan and asks what we can learn from her for the future.

In 2045 I shall be 77, if I’m not already just an inscription on some obscure prize at the Mòd or the occasional trawl through the back catalogue of vintage Gaelic recordings. I find it hard to visualise what a world with Gaelic or a world for Gaels will be like then. But if I make it that far, I will hope to have worn Jenny Joseph’s purple for long enough to be the independent, articulate, recalcitrant older woman (don’t you sibh me now!) that rattles her stick along the railings, no longer afraid to speak my mind in and about Gaelic.

At that noble age, I’d like to think that I had learned a thing or two from those that went before me (and those that are coming after). Not just the close and extended Gaelic communities that surrounded me and gave me the words that I carry on my lips and in my heart today, but the icons of an era of protest, of campaign, of uprising. Of learning, of diplomacy, of embassy. And together, of aspiration and of hope.

I have spent the last while walking in the footsteps of Jessie Niven MacLachlan, the world’s first global Gaelic superstar. Stood on some of the stages that helped make her name, walked down the streets of her native Oban, sung over a forgotten grave looking north from Glasgow to her beloved Argyllshire hills as we work to restore her memorial and her legacy.

The toast of European royalty and of émigrés Scots the world over, Jessie was the Queen of Gaelic Song, her conduit to spheres of influence by way of her musical talents, but also by way of a singular determination to carve a career for herself as a Gaelic singer on

a world stage where she would have been minoritised by dint of her modest background, her womanhood and her native language.

She had the support throughout her too-short life of Robert, her husband, but she herself must have been a shrewd businesswoman, an astute diplomat and a contemporary cultural influencer that would be more than up for taking on the world of 2045. A mother-tongue Gaelic teenager from the tiny Victorian town of Oban jumping on the new railway to the empire’s capital in London in order to secure a classical voice training at the highest level would have encountered no more of a culture shock.

But though she took on a new world, and donned the role of the prima donna to make hers and Gaelic’s name worldwide, she did not forget her roots. In each corner of her touring globe, Jessie MacLachlan made it her business to seek out the Gaels, to converse with ordinary folk eager for the relief and pleasure of talking in their native tongue, and to campaign in her own way for the financial support of Gaelic education back home.

Jessie would relish 2045. She would work the media, she would ride the trends – no, set them. But she would also be a woman who knew where she came from. Who would know what must be cherished and kept vibrantly alive, rather than on some kind of half-life. What would have to be  uncompromising in our efforts to let shine our unique facet on the prism of human experience.

On the day that I field hundreds of social media posts about the junking of thousands of pounds’ worth of Gaelic books in Jessie’s own home town, I believe that we do today and will need in 2045 to channel the power of the women of the Gaelic revival of a century and and a half ago and more.

We will need the learning and culturally internationalist outlook of Katherine Whyte Grant. We will need the firebrand spirit and uncompromising rhetoric of Màiri Mhòr nan Òran. But in a world where each of us, whether mother-tongue speakers, new arrival acquirers, or committed learners, will often feel marginalised, isolated and alone in our efforts, we will all need to channel the chutzpah of the young Jessie, boarding that train in Oban.

We raise the spectacular Celtic cross that commemorates Jessie MacNiven MacLachan next week in Cathcart, just in time for Seachdain na Gàidhlig. It’s been restored by a Gael – Alex MacIntyre from South Uist – and is the first of the great memorials in the til now neglected Victorian garden cemetery to be restored to its full Balmoral Red granite glory. I’ll take a look at the QR code that is now etched on one small corner of the stone, and marvel at how Gaels of all backgrounds, and garden wanderers and dog walkers alike will be able to learn through this, about the Queen of Gaelic Song.

And I’ll wonder how they and the 2045 generation will take inspiration from her life and music as they stand on this Glasgow hilltop or scan the landscape virtually, making out through a tangle of now mature trees the faint but almost tangible outline of Jessie’s Argyllshire hills.

With thanks to Dr Priscilla Scott, who is ever generous with her research.

Jessie’s memorial cross was returned to the cemetery in April 2022, after being expertly and lovingly repaired. A commemoration took place on 13 May, celebrating the work which was done by Gaelic speakers at each stage, including the stonemason, Alaig Mac an t-Saoir from South Uist, who is well acquainted with the cemetery and it’s large memorials. Gaelic speakers from the city and further afield were present, listening to the piper Aonghas MacColla from Benderloch who played ‘Cha Till MacCruimein’, as his great uncle had done on the very day of Jessie’s burial.

As is written on the memorial:

And slightly differently in English:

“While Scots and Gaelic song endures, so long will the memory of Jessie N. MacLachlan remain fragrant as the heath upon Scotland’s bens and her name and fame be remembered as that of a Queen of Melody.”

Mary Ann Kennedy is a musician and broadcaster, based at Watercolour Music in Lochaber.