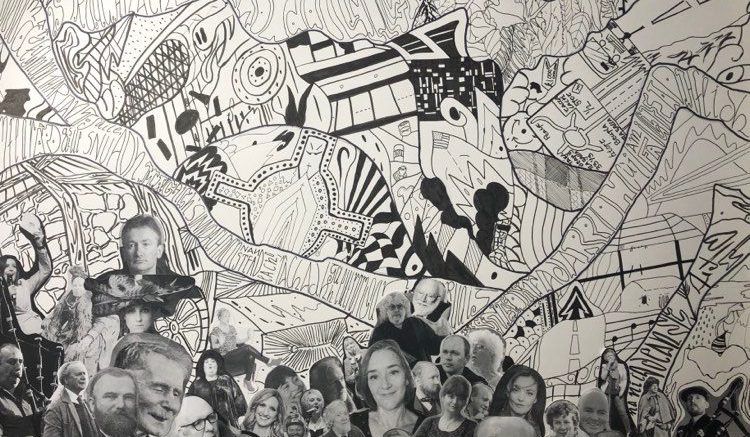 In this blog, artist and teacher Críostóir de Piondargás looks at the lively world of Gaelic visual arts in 2045 and the steps that were required to reach that goal.

Like other cultures around the world, the history of the Gaels is full of examples of visual artistry. Today, visual arts stand alongside music, song, drama and poetry as a precious part of Gaelic culture. It is easy to forget that, until the last 20 years, the visual arts of the Highlands failed to achieve recognition and take their place among the other arts. Despite a plethora of examples from history; medieval stone carving, the fine metalworking skills which created the Brooch of Lorne, Early Modern Textile printing or the mastery of William MacTaggart’s painting and more, our visual art heritage was almost forgotten. We are fortunate that this is no longer the case, but let us look back at the changes which have influence the change.

It should be noted that the publication of the book A History of the Visual Arts of the Highlands is a cornerstone of that renaissance. This book focused not only on historical examples, but on the many wonderful examples of contemporary visual art, including works by the likes of Eoghan MacColla and Màiri Gillies. It is not clear how we could have arrived at our current position without it. Although there was considerable evidence on the subject previously, the book presented it in such a way as to inspire future innovation.

One of developments inspired by the book is Gaelic-medium arts education. From primary school arts education, to community classes all over Scotland, it’s too easy to take these opportunities for granted, given their range and prevalence. However, this was not always the case. At the beginning of the 2020s, there were only three secondary schools where pupils could study art through the medium of Gaelic to Higher level. What a difference from today where students across the country have these opportunities. In addition, if a pupil wanted to pursue a career in the art world, they had to choose art courses through the medium of English.

The establishment of the first Gaelic-medium art course at Sabhal Mòr Ostaig later in the decade changed the situation. Many of the Highlands leading artists of  recent years have come through that course. One should not overestimate the importance of learning art through the medium of Gaelic but the impact it has had on the confidence and awareness of the visual arts in the Highlands is undeniable. The existence of a distinctive Highland School of art is testament to the success of the course.

Today, most Gaels recognise the importance of the visual arts to Gaelic culture. Of course, we can express our feelings and perspectives through a wide variety of art, but if one does not understand the language itself, can one truly appreciate a Gaelic song or an artistic piece of poetry? The visual arts give a chance for the Gaels’ view of the world to be shared with non-Gaelic speakers. The significance of this has been demonstrated in recent decades by the exhibition of the Highlands finest visual artwork around the world.

Our national festivals, Seachdain na Gàidhlig and the National Mod have played a major role in showcasing Highland visual arts success. Over the last two decades, these festivals have provided great opportunities for Highland artists to exhibit their work nationally and internationally, a route into the art world for many in Highland arts. It is almost incredible for today’s young people that such opportunities did not exist in the early years of the 21st Century.

Today’s Gaels should be grateful to the leaders of our community in the 2020s. Without their vision, who knows where we would be now. They built infrastructure but also took the visual arts from obscurity to the level they are at today, where they are respected, and have their rightful place among the other Gaelic arts. In 20 years time, as our young people look back at today, they might consider it a golden age for the visual arts. Personally, I am hopeful that the sector will be seen as a huge oak tree, going from strength to strength as it grows more and more with each generation. If so, I’m sure they will look back to the 2020s where the seeds were sown.

Críostóir de Piondargás was born in Govan in 1986 and raised in Mosspark where he still lives. His family hail from Ireland and he is a fluent Irish speaker. He studied product design, illustration and graphic design at college and university before studying for a BA (Hons) Gaelic Language and Culture with Sabhal Mòr Ostaig. Last year, Críostóir graduated with an MA from the Royal Conservatoire of Scotland. He has over ten years experience as a secondary school teacher in Gaelic Medium Education, including six years at Sgoil Ghàidhlig Ghlaschu. He is now a teacher of art (GME) and Gaelic at Greenfaulds High School in Cumbernauld. In addition to teaching he works as a freelance artist and illustrator with a particular interest in printmaking, digital art and Gaelic subjects.