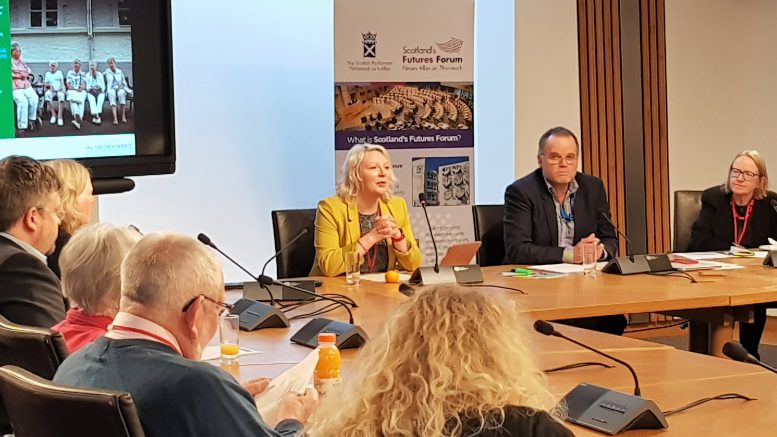 Wednesday 23 January 2019, at the Scottish Parliament

How can housing meet the needs of older people in the future?

In conjunction with the Scottish Parliament’s Cross-Party Groups on Housing and on Older People, Age and Ageing, Scotland’s Futures Forum hosted a debate on the future for housing with an ageing population.

Showcasing research produced by experts at the University of Stirling and Heriot-Watt University, the debate looked forward to 2030, our aspirations for housing in the future, and what we have to do now to achieve them.

It was hosted by Andy Wightman MSP, Convener of the CPG on Housing.

Dr Vikki McCall outlined both the innovative approach to the research and the thought-provoking recommendations arising from it.

The research project “Housing and Ageing: Linking strategy to future delivery for Scotland, Wales and England 2030“, funded by the Scottish Universities Insight Institute, used a “serious game” to engage stakeholders in a discussion about the pressures and opportunities in providing housing for Scotland’s growing population.

Dr McCall went on to outline the key themes that emerged from it, including the fact that talks, decisions and change must start with and include older people. She noted that we must start thinking of housing as a much wider, holistic concept that takes into consideration place and belonging – especially in the rural context.

As Dr McCall concluded, it is not just about ageing, but ageing well.

A wide-ranging discussion followed the presentation, much of which centred on the value of relationships and the importance of placing people at the centre of any process.

Comments were made about interconnectedness and the need to design and develop services that enable people to live for longer in their own community, which is perhaps more important than their continuing to live in their own home. There was also a challenge to the idea of living independently: “We all live interdependently”.

It was agreed that public policy is very important: planning policy sets the framework, and accessibility standards outline what developers have to do. It was suggested that developers are happy to take guidance on what to build: as long as it is economically viable, they will try to build it.

The concept of rightsizing was introduced – having the right house in the right place at the right time. The example of Southfield in Edinburgh was cited, where there is medium-density housing with seven types of accommodation. Also mentioned were incentives provided in Wales for “last-time buyers”.

The question of the ideal tenure mix was asked, and it was stated that choice is key. There are cultural barriers to be aware of in moving between owner occupier, social renting and private renting.

Looking to the future, it was noted that there is a need for consistency in funding to support energy efficient and low-carbon options in housing. There will also be big differences in needs and expectations among older people, which will have to be reflected in our planning now.

Finally, noting the different opportunities and challenges ahead, it was agreed that a key lesson from the research project is the value in different people from different backgrounds and perspectives coming together to find solutions that work for us all.

The event was attended by a wide range of interested parties, including MSPs Pauline McNeill and Graham Simpson MSP.

A week after this event, Graham Simpson MSP led a parliamentary debate on Housing and Ageing.

Watch the debate below and read the transcript online: www.parliament.scot/parliamentarybusiness/report.aspx?r=11917&i=107729.

Isla Whately from LGiU wrote about the seminar in this blog on the LGiU website: