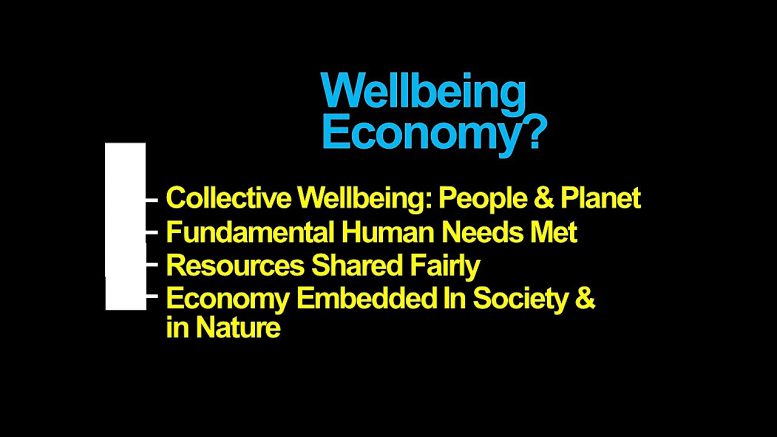 Tuesday 5 February 2019, at the Scottish Parliament

In conjunction with the Scottish Parliament’s Economy, Energy and Fair Work Committee, the Futures Forum held a seminar on the idea of Scotland as a wellbeing economy.

The seminar was chaired by Gordon Lindhurst MSP, convener of the Committee, and featured a presentation from Dr Katherine Trebeck, Policy and Knowledge Lead for the Wellbeing Economy Alliance Scotland, on the concept of and reasons for a wellbeing economy, and the work of WEAll Scotland.

Other members of the Wellbeing Economy Alliance Scotland also participated, with Peter Kelly from the Poverty Alliance and Andrew Cave from Baillie Gifford providing perspectives on why their organisations are involved.

Can Scotland be a world leader in wellbeing?

Read the reflections of Jennifer Wallace, head of policy at the Carnegie UK Trust, on the seminar here: http://www.scotlandfutureforum.org/can-scotland-be-a-world-leader-in-wellbeing/

Katherine is Policy and Knowledge Lead for the Wellbeing Economy Alliance. She has over eight years’ experience in various roles with Oxfam GB – as a Senior Researcher for the Global Research Team, UK Policy Manager, and Research and Policy Advisor for Oxfam Scotland.

She was Rapporteur for Club de Madrid’s Working Group on Shared Societies and Sustainability and is on the advisory board for the Centre for Understanding Sustainable Prosperity; the Living Well Within Limits project; A Good Life for All Within Planetary Boundaries; and the Economic Democracy Index project.

Her most recent book The Economics of Arrival: Ideas for a Grown Up Economy (co-authored with Jeremy Williams) was published in January 2019.

Participants in the seminar included MSPs, Scottish Parliament staff and members of the Wellbeing Economy Alliance Scotland as invited guests.

In November, the Scottish Government launched the Wellbeing Economy Governments initiative with Iceland and New Zealand (http://wellbeingeconomygovs.org/). This network aims to facilitate the sharing of experience and expertise among officials working to embed wellbeing outcomes in economic policy. Its secretariat is run from the office of the Scottish Government’s Chief Economic Adviser.

Separately, Scotland is home to a new chapter of the global Wellbeing Economy Alliance (WE-All). WEAll exists to help bring about a transformation of the economic system, of society and of institutions so that all actors prioritise shared wellbeing on a healthy planet. In Scotland, members include global finance companies, social entrepreneurs, and campaign groups such as the Poverty Alliance.

We use cookies to ensure that we give you the best experience on our website. If you continue to use this site we will assume that you are happy with it.OK