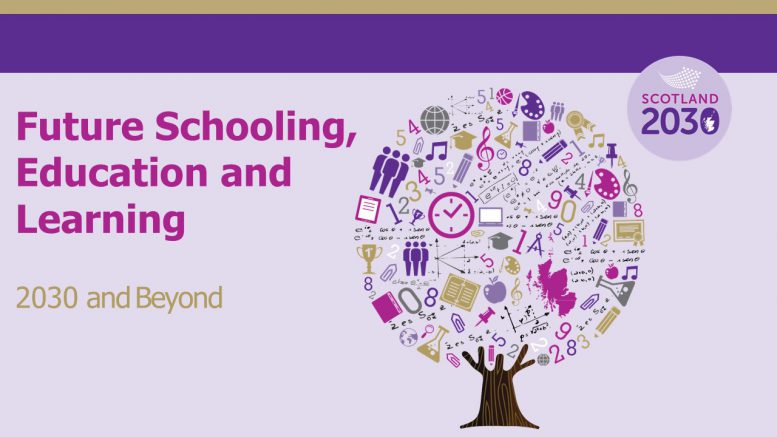 What could schooling, education and learning look like in 2030 and beyond?

Starting with this question, the Goodison Group in Scotland and Scotland’s Futures Forum have been exploring education, schooling and learning in 2030 and beyond.

This Schooling, Education and Learning report presents a scenario of what education might look like in Scotland in 2030 and beyond, and it considers the implications for leadership and action.

The scenario is not a prediction, and it has been developed, along with the suggestions on how it might be realised, to provoke thoughts, ideas and responses.

While the scenario itself may provoke both agreement and disagreement, what emerged clearly from the project is that no change is not an option.

If we are to meet the challenges of the coming decade, we will have to think creatively about our education system: What are your aspirations for education and learning in 2030 and beyond?

To mark the publication of the report, pupils from St Paul’s RC High School in Glasgow and its feeder primary schools presented their interpretation of what school might look like in 2030 at an event in the Scottish Parliament.

Working with the social enterprise Braw Talent, the pupils created a film about their hopes for the future. Using the scenario as a basis, they wrote, directed, acted in and produced this short film.

You can read more about the film and its showing at Parliament:

From 2017 to 2020, in a series of interactive seminars, the Goodison Group in Scotland and Scotland’s Futures Forum brought together participants from a wide range of backgrounds to consider how Scottish education could and should change.

We heard from experts on how technology may change our world, and on the skills that our economy will need in the future.

We brought together leading figures from education and beyond to consider our aspirations and to challenge our thinking on the kind of leadership required over the coming decade.

We worked with Young Scot, the Scottish Youth Parliament and the Children’s Parliament to hear directly from children and young people; through roundtable discussions and a survey, we explored with them what might be different in our schools in 2030.

Throughout the project, we responded to opportunities to hear from different groups and to experiment with different approaches. Interactive sessions using the U-process helped unlock other forms of knowledge, such as creativity and body knowledge, and generate fresh insights into how we bring about change.

In 2017, four events focused on different aspects of education in Scotland:

In 2018, the events move to focus on different stages of education in Scotland:

In 2019, the programme moved to consider the leadership needed at all levels to deliver the change expected and hoped for:

As part of the Our Future Scotland project, gathering people’s aspirations for Scotland in 2030, we spoke to several leading figures in Scotland about the future of education. What do they think we will be learning in 2030? Watch this short video to find out – and see if you agree with them!