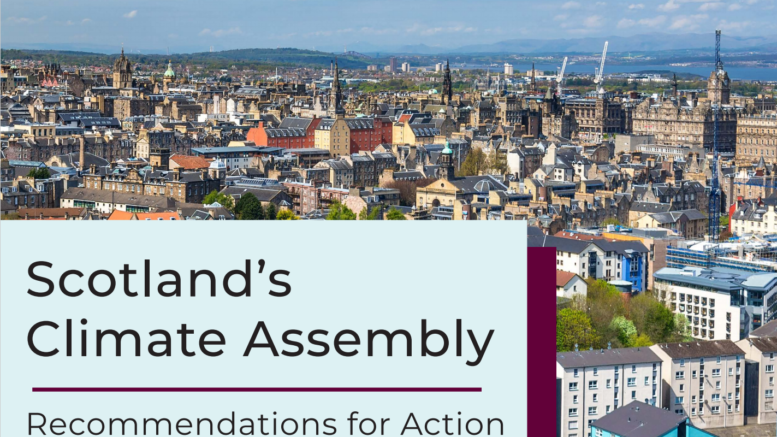 How should Scotland change to tackle the climate emergency in an effective and fair way?

That’s the key question tackled by over 100 citizens in Scotland’s Climate Assembly, which published its detailed recommendations for action in June 2021.

What should the Scottish Government, the Scottish Parliament and we as citizens do now to secure a sustainable future?

In this panel discussion, members of Scotland’s Climate Assembly and the Children’s Parliament, which supported its work, discussed their journey through the process and the recommendations they agreed.

The Climate Assembly, made up of around 100 people from throughout Scotland, were asked to answer the question: “How should Scotland change to tackle the climate emergency in an effective and fair way?”

Also attending was Professor Iain Stewart, Professor of Geoscience Communication at the University of Plymouth and Communications Lead for Scotland’s Climate Assembly.

Alison Johnstone MSP is the Presiding Officer of the Scottish Parliament. In this role, she also acts as chair of Scotland’s Futures Forum, the Parliament’s futures think-tank.

Watch films made by and for
the Climate Assembly
Read the Children’s
Parliament Report
Read about the Scottish Parliament’s
Net Zero, Energy and Transport Committee

Film made by the Children’s Parliament

The discussion was wide ranging. It included questions on both the process of Scotland’s Climate Assembly [SCA] and the subject of the question its members were tasked with answering: “How should Scotland change to tackle the climate emergency in an effective and fair way?”

All participants noted the importance of clear, authoritative information provided by the Climate Assembly’s expert participants. CA members said it both informed them and encouraged them to make strong recommendations at the end of the process. They also valued the ability to explore the issues in a safe space, asking questions of those who had presented to them to check their understanding and clarify queries.

Effect on own behaviour

Although some hadn’t changed their behaviour massively – they had previously been convinced of the need for change before they joined the Climate Assembly – others said that it had provided added impetus or encouragement to act or think differently. Speaking about it with family and friends had also had an effect. All agreed that the process of learning more had been valuable experience, and believed that the role of public information was vital in the coming years as we tackle the issue.

Role of children and young people

A key part of Scotland’s Climate Assembly had been the role of the Children’s Parliament in its work.

As SCA members had to be over the age of 16, its secretariat invited the Children’s Parliament to support the participation and engagement of children under 16. The aim was to ensure that their views, experiences and ideas were part of the discussions and calls to action.

To capture the diversity of children’s views and experiences, and to echo the process of the Assembly, the Children’s Parliament worked with 100 children across Scotland from 10 schools. Again mirroring the SCA, the children were from a range of income and ethnicity groups and represented both urban and rural communities.

As part of the discussion, the members of Children’s Parliament talked about their favourite recommendations, including the call for better climate education for both children and adults. While children can learn about things like littering, the bigger picture is sometimes ignored. Given that everyone needs to be part of the solutions, they thought that everyone needs to learn about the bigger picture.

Children and young people can often embolden adults to take bigger steps. For example, the Children’s Parliament’s call to action on banning plastic inspired adult SCA members to rethink and revise their recommendation on this issue.

Given that children and young people will be living with the effects of the decisions taken today for the longest time, it was noted how important it is to involve them in decision-making processes about the climate emergency.

As noted above, a key point of the discussion was involving more people in learning about and deciding what to do about climate change. This is both from a general point of view but also, in particular, in looking to implementing the changes and solutions needed in the coming years.

As an example, one SCA member picked out the value in speaking to the individuals, groups and organisations that will be needed to make the changes. That could include engineers, designers, builders and others with the practical skills needed to change our country.

The idea also related to the role of multinational businesses, for example in making big changes to the way they work through using sustainable packaging materials and electric vehicles for distributing goods.

Changing the culture in Scotland

Overall, it was agreed that we need to build a movement to tackle climate change in Scotland. This is a problem for all of society so all of society needs to be involved in both the discussions and the solutions.

As one member of the Children’s Parliament (aged 10) noted, “I think the hardest thing is getting people on board. We keep saying it is an emergency, but people still don’t listen to us.”

Changing that will be the major challenge in the coming years.