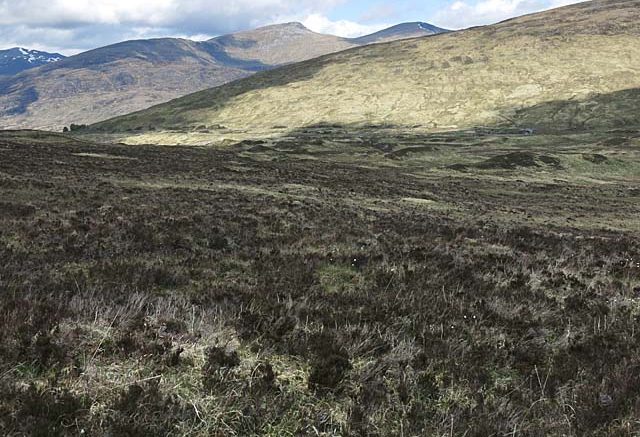 By Eleanore Widger, University of Dundee and @Nell Widger

Earlier this year the Scottish Gamekeepers Association (SGA) and Mountaineering Scotland made an unlikely alliance in opposition to government plans to plant thousands of new trees. According to the Guardian, the Scottish Government intends to increase woodland cover from 17% to 25% by 2050 as part of its Draft Climate Change Plan.

Historically at odds due to conflicts over access, SGA and Mountaineering Scotland were united on this issue because both have an interest in preserving Scotland’s ‘dramatic open views and vistas’. Together, they wrote to the government to express their concern that, if large-scale afforestation went ahead, Scotland would not only lose its most culturally distinctive landscapes, but also some of its most ecologically valuable and globally rare heath and moorland habitats.

The rarity of heather moorland, and its richness as a habitat for rare species, is in fact contested. For example, George Monbiot argues that there are “between 2 and 3 million hectares of upland heath in the UK alone”.[1] Furthermore, he suggests, so-called ‘key-indicators’ of the ecological health of heather moorland, such as the presence of red grouse, mask the absence of other rarer species. According to him, the desire to preserve this kind of landscape speaks more of what is deemed beautiful and interesting to humans than what is actually ecologically precious. Indeed, whilst heather might provide habitats for certain rarer species, including hazel grouse and capercaillie, a study in the Cairngorms showed that woodland is 13 times richer in terms of biodiversity than moorland, hosting many more birds as well as beetles, spiders, fungi and a range of flora.[2]

What is interesting and perhaps alarming about this dispute is that instinctively it feels as though organisations with a conservation agenda such as SGA and Mountaineering Scotland should share with the Scottish Government a basic understanding of environmental issues. But what comes to the surface is not only the potential discrepancy between culturally and ecologically important landscapes, but also the debilitating lack of consensus over what constitutes a healthy ecosystem and good environmental practice.

In essence, this dispute reveals two polarised attitudes towards Scottish landscape, which might be understood as a kind of cultural dendrophobia, or fear of trees, versus dendrophilia, or love of trees. Both positions undoubtedly rest to some degree on the different assumptions about Scotland’s landscapes which I have mentioned in previous posts: on one hand that Scotland was ‘originally’ a densely forested landscape, to which state it should be ‘returned’; and on the other that its rocky and heather-clad mountains are its most authentic and beautiful features.

As I suggested last time, both positions contain grains of truth whilst also being founded on cultural value-judgements. Dense forests and heather moors both have their own romance and are powerfully emotive – but, as the dogmatism of many of their various proponents suggests, are apparently mutually exclusive. One question we will certainly have to address as a nation is whether it is possible to balance the need to offset carbon emissions through afforestation with the preservation of the open landscapes many deem not only to be economically important for tourism but also vital to Scotland’s identity.

All this is to say nothing of the more obvious tensions, such as that between Scotland’s position as an oil and gas rich country and the globally recognised beauty and ‘wildness’ of its landscapes. Unconventional Oil and Gas Extraction (UOG), including hydraulic fracturing, or fracking, is proposed by some on the basis of its potential to create jobs, provide Scotland’s people with affordable energy, and negate the need for nuclear energy; but many others vehemently oppose such interventions for equally resonant reasons – UOG extraction infrastructure might have devastating environmental impacts and delay investment in renewable energy.

Yet renewable energy is itself a highly volatile issue in Scotland, particularly when it comes to onshore wind farms. Do they obstruct the view and harm local ecology or are they themselves graceful additions to the landscape which promise a carbon-neutral future? Things get personal: those who decry wind farms are often accused of NIMBYism, whilst those who celebrate them are perceived to have distinctly windmill-free back yards.

Arts and Humanities research may be able to provide more nuanced insight into the multitude of different beliefs and opinions of people in Scotland. Recently Claire Haggett from the University of Edinburgh collaborated with artists Robbie Coleman and Jo Hodges to investigate the responses of a small remote-rural community in South West Scotland to renewable energy development plans. Noticing that the Environmental Impact Assessment necessary for any large-scale project did not require any consideration of the local community other than impacts on jobs and population, Haggett, Coleman and Hodges expanded the traditional remit of these EIAs to include emotional and narrative responses from community members.[3]

The research revealed that social relations and different senses of place attachment have a huge impact on people’s acceptance or otherwise of renewable energy infrastructure in their area. A potentially radical and extremely useful discovery was that in many cases community landownership ‘inspire[d] new forms of emotional place attachment’ in which ‘the idea of local people taking charge’ was found to be ‘a key impetus for […] communities to pursue renewable energy’.[4] Perhaps, then, more united progress towards environmental sustainability rests less on government directives than on a more equitable distribution of land amongst Scotland’s people.

The research also found that there are some marked differences between the formally acknowledged significances of Scottish landscape and the values of the people in it. The area of Scotland identified in Haggett’s project was ‘officially’ seen as remote and therefore suitable for renewable energy infrastructure, but the local community did not take this view – on one hand remoteness and ‘unspoiltness’ was something they prized and felt would be threatened by the development, and on the other they protested the idea that the home of a vibrant, though small, community should be seen as remote (and therefore in a sense disposable) at all. Projects such as Haggett’s demonstrate the fact that there is no homogenous voice on Scottish landscape – indeed that there is no homogenous Scottish landscape – but also offer a way of increasing synergy between national and local concerns.

Environmental protection versus the right to make a living

It is clear that Scotland’s economy is to some extent in conflict with its ecology. For instance, the balance between marine conservation and a prospering fishing industry is an extremely delicate one. And who is to say which is more important? Should we prioritise environmental protection or the right to make a living in what can be precarious local economic circumstances? Indeed, even supposing agreement was reached on prioritising environmental protection, the difference of opinion between Mountaineering Scotland, SGA and the Scottish Government shows that the issue of which environments should be protected remains unresolved.

As we approach 2030, it may not be enough to try to maintain this awkward balance, but to change a system in which ecologically problematic practices are for some an economic necessity. A positive future for Scotland’s landscapes will rely on greater understanding of how geography and demography shape our views on what’s best for the environment, as well as greater openness and honesty about our competing interests in the land.

As Scotland and its people work to more fully understand issues around land ownership and countryside practices through inquiries such as the 2014 Land Reform Review, Environmental Humanities research can provide important historical context, reminding us that the landscapes we see as wild, rugged, and quintessentially Scottish are at least in part the product of the Romantic imagination.