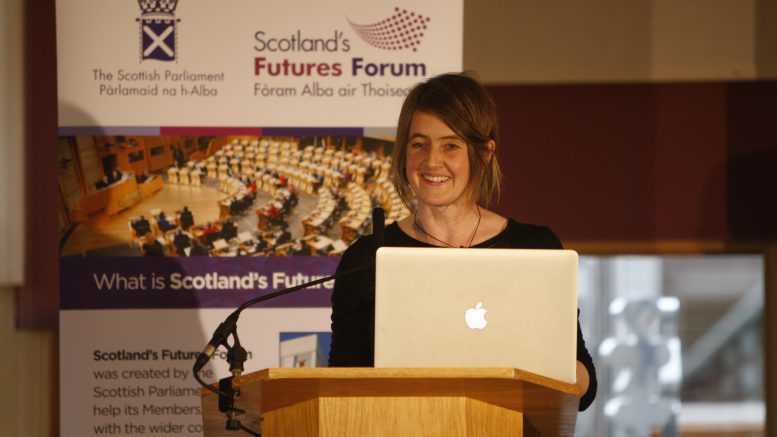 Billed as an exploration of Scotland’s culture and society, the programme will ask what kind of country do we want Scotland to be in 2030?

The launch event examined developments in technology as its first theme, and considered what challenges and opportunities it’s likely to present over the next decade and a half.

Helping to launch the programme was videogames developer and brains behind the rise of Minecraft, Chris van der Kuyl.  He presented his vision of the technological developments that will frame society by 2030, including the use of big data and the expansion of virtual intelligence.

Joining him was singer, songwriter and essayist Karine Polwart, who reflected on what these changes might mean for Scotland and how we as a nation can react.

“Scotland’s Futures Forum exists as the Parliament’s think-tank to create space for MSPs, and others, to look beyond the usual timescales of the electoral cycle and tackle the major, long term challenges facing Scotland.

“The Scotland 2030 programme promises to be an ambitious exploration of Scotland’s culture and society, offering us the chance to talk about our hopes and dreams for the future of this country.

“Chris van der Kuyl and Karine Polwart will kick things off with their take on technology, and the challenges and the opportunities it will bring by 2030.

“Over the course of this programme we will approach Scotland 2030 from a range of different perspectives and viewpoints as we seek to answer the question: what kind of country do we want Scotland to be in 2030?”

Chris van der Kuyl is an entrepreneur whose expertise combines the start-up, development and market listed business arena in the technology, media and entertainment sectors. He has a particular interest in education.

Chris is a visiting professor of digital entertainment at University of Abertay Dundee and sits on the boards of Scottish Institute for Enterprise, Scottish EDGE Advisory, Dundee Science Centre, Dundee Museums Trust and the High School of Dundee.

Karine Polwart is a Scottish singer, songwriter, composer and essayist. Her songs combine folk influences and myth, and, in her own words, themes as diverse as “Donald Trump’s corporate megalomania, Charles Darwin’s family life and the complexities of modern parenthood.”  Karine sings traditional songs too and writes to commission for theatre, animation and thematic collaborative projects. She is four times winner at the BBC Radio 2 Folk Awards, including twice for Best Original Song. She performed at the opening concert of this year’s Celtic Connections festival.