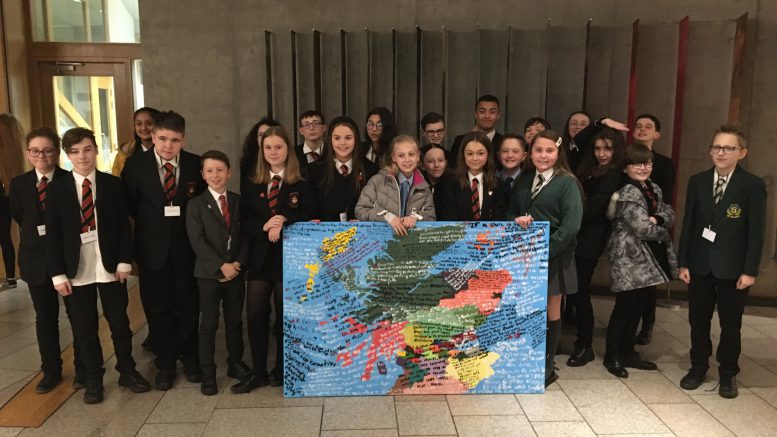 2020 has been a year like no other. Often, it has been hard for many of us to look beyond the end of the week, let alone into the long-term future.

At Scotland’s Futures Forum, like many other places, our work has been curtailed in 2020 as we’ve adapted to changing circumstances. But before the pandemic hit, and since life changed for us all, we’ve still tried to find space to look positively at our shared future.

This short review of our 2020 work outlines what we’ve done as the Scottish Parliament’s think-tank, and it shares some reflections that are designed to help us all take a step back from the here and now and look to a more positive future.

We look forward to doing more next year and beyond. In the meantime, we wish you all a safe and healthy Christmas and new year.

In November this year, we published a report on our major programme in this parliamentary session, looking at what life will be like in Scotland in 2030 and beyond.

The report “Scotland 2030: A Positive View of Our Future” covered the major issues for our future lives, from birth to death, that had come out of our programme. These included some important questions for us all to consider for the next 10 years.

Throughout the programme, our event participants shared their thoughts and ideas on how to approach the future. As part of our report, we also outlined 10 ideas for the Scottish Parliament to consider – with some background information to support them.

Ranging from a Museum of Failure to an Autonomous Vehicles testing site on a Scottish island, these creative ideas are designed to get us thinking about the particular Scottish response to some global challenges.

Throughout the programme, we sought to bring creativity to our discussions, both by asking writers and others to share their thoughts on the issues at hand and by sharing their creative reflections on our shared future.

The future can be hard to imagine, and stories and art can help us envisage the kind of future we want and discuss our aspirations with others.

From our first event, where the writer and singer Karine Polwart read and discussed three imagined news stories from 2030, to our work with Cymera and Shoreline of Infinity to support a storytelling competition, we have supported this work where possible.

These ideas, reflections and provocations complement the work in our report, “Scotland 2030: A Positive View of Our Future”.

View the creative reflections on Scotland in 2030

In November, as we brought the Scotland 2030 Programme to a conclusion, we were delighted to partner with the Scottish Parliament on its first virtual Festival of Politics.

The Festival programme put the spotlight on the key issues facing society over the next 10 years, and it opened with a session hosted by the Parliament’s Presiding Officer on Scotland in 2030.

The discussion featured the Professor Anne Glover, president of the Royal Society of Edinburgh, the author and philosopher Roman Krznaric, the Commissioner for Children and Young People Scotland Bruce Adamson, and the writer and broadcaster Tomiwa Folorunso.

Both Bruce and Tomiwa blogged about their thoughts looking to 2030. You can read their reflections on our website.

The video, produced in conjunction with the social enterprise Braw Talent, was inspired by our work with the Goodison Group in Scotland on Schooling, Education and Learning in 2030 and beyond.

This project report presents a scenario of what education might look like in Scotland in 2030 and beyond, and it considers the implications for leadership and action.

Read the project report and watch the video

Stealing our cities: land-use analysis in Glasgow and Dundee

Using three case studies in Glasgow and Dundee, the study shows that space is overwhelmingly dedicated to the car: roads, car parks and on-street parking cumulatively account for the highest proportion of space at each site.

In the summer, in partnership with SAGES (the Scottish Alliance for Geoscience, Environment and Society), and the Edinburgh Centre for Carbon Innovation, we published a research report by PhD student Marli de Jongh on the amount of space private cars take up in Scotland’s cities.

The aim of the project was to look creatively at the role of transport in climate change by assessing how much space is dedicated to private vehicles in comparison to other modes of transport in Scottish cities.

Marli also found that at the Scottish Exhibition Campus in Glasgow – the venue for next year’s COP26 conference – more space is dedicated to smoking than bike parking.

“The different pieces we have (like education, media, events and the law) are the roots of the tree of living Gaelic. The tree will not survive if we only water one root. The land under the tree is the community and the government is the water; if the water renews the whole tree it will be much healthier. No single root can save our language – they all need each other.”

The future for Gaelic – and in Gaelic

The report covered the expert presentations, workshop groups and visions for 2030, including a Scotland where we can have fun in Gaelic, watching Gaelic stand-ups and Gaelic-language television dramas.

We also asked whether we should link Gaelic’s future to new economic sectors and technologies, rather than our natural heritage.

Read the report, visions and key questions for the future

One vision for 2030 was for Gaelic not just to be used to talk about Gaelic. To support that, we published a summary of our wide-ranging Scotland 2030 Programme report, along with our 10 ideas for 2030, in Gaelic.

Election next year will provide new context for our work

Any questions, don’t hesitate to get in touch and all the best for a safe and happy Christmas and 2021.5