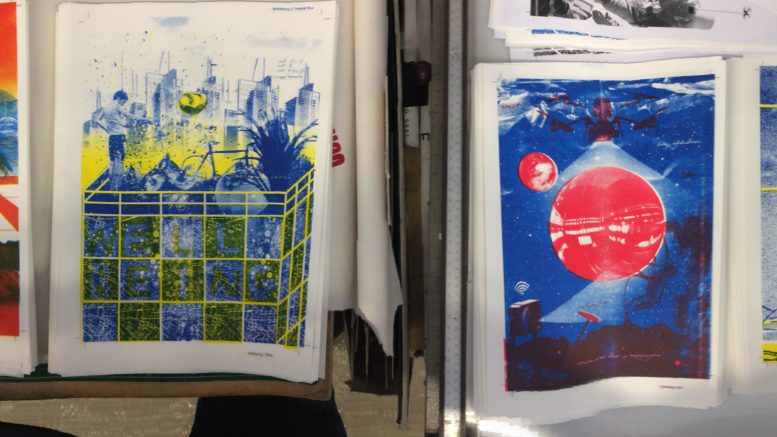 Throughout the Scotland 2030 Programme, we sought to bring creativity to our discussions, both by asking writers and others to share their thoughts on the issues at hand and by sharing their creative reflections on our shared future.

The future can be hard to imagine, and stories and art can help us envisage the kind of future we want and discuss our aspirations with others.

From our first event, where the writer and singer Karine Polwart read and discussed three imagined news stories from 2030, to our work with Cymera and Shoreline of Infinity to support a storytelling competition, we have supported this work where possible.

These ideas, reflections and provocations complement the work in our report, “Scotland 2030: A Positive View of Our Future”.

Karine Polwart’s three imagined news stories from 2030 considered the potential effect of automation on our work and lives, the balance between digital connectivity and rural wilderness, and the datafication of our lives.

The Future and Me

What does the future hold for young people? What do they think will happen? As part of a BBC Scotland Learning project “The Future and Me”, pupils from throughout Scotland were invited to share their predictions for the future.

As part of a paid internship through the Scottish Graduate School for Arts and Humanities, Glasgow School of Art PhD student Fiona J MacLellan worked as part of Scotland’s Futures Forum team.

During her placement, Fiona produced a set of four artworks to visually represent the growing body of work coming from the Scotland 2030 Programme and the Our Future Scotland project.

A Citizen’s Income: A Creative Response

Susie Maguire, the writer and performer, was unable to take part as planned in the Futures Forum’s event on “Scotland 2030: A Citizen’s Income?” on Tuesday 2 April 2019. We therefore asked her to contribute her thoughts on the issue in whichever way she wanted.

In response, Susie produced a dream from the future, along with her reflections on the piece and several reference points that she used in its preparation.

In 2020, we were delighted to support a short story competition with Cymera, Scotland’s Festival of Science Fiction, Fantasy and Horror Writing, and Shoreline of Infinity, Scotland’s award-winning science fiction magazine.

The winning story, Chrysalis by Laura Scotland, explored a mother’s hopes and fears for a newborn child, while the runners-up imagine a sustainable Scotland through a school trip (Saplings by Sophie Charlotte Baumert) and a very different Edinburgh (The Thief and the Watchdog by Katya Bacica).